© UNICEF/Arimacs Wilander
On 24 December 2018 in Indonesia, residents search through rubble to salvage any possessions from their home that was damaged during the tsunami. They are also trying to find family members who have been missing since the tsunami struck.

Tsunamis are rare, but when they strike, they are the deadliest and most costly of natural hazards. With half of the world’s population expected to live in coastal areas more prone to tsunamis by 2030, investing in early warning systems and resilient infrastructure, will be vital to saving lives and economies, said the top UN official on disaster risks on Tuesday.

Ms.  Mizutori told UN News in an interview, the for every dollar invested in prevention, most countries will reap four times the economic benefit, thus, “if we know how to make a society resilient, a hazard doesn’t necessarily have to become a disaster.”

In the last century, Tsunamis have claimed more than a quarter of a million lives, killing on average, around 4,600 per event, over the course of  58 recorded instances, according to UN figures.

Nearly 15 years on from the catastrophic Indian Ocean tsunami in December 2004, which killed nearly 230,000 people in 14 countries, the technology of early warning systems across the world’s oceans has improved, and as a result, many lives have been saved, Secretary-General António Guterres said in his message for the Day.

However, “the risks remain immense” he added, and “it is clear from the growing economic losses over the last 20 years, that we have not yet fully learned the importance of disaster-proofing critical infrastructure.”

A September report by the Intergovernmental Panel on Climate Change (IPCC) spotlighting global temperature increases, changes to the world’s water supply, and the overall scale of the climate emergency, revealed that extreme sea-level events are expected to hit once a year by 2050.

“Can you think of one single country which is not really experiencing any disasters?” Ms.  Mizutori asked, speaking to UN News.

With more people living in coastal areas, it will be increasingly important to be able to predict disasters before they strike, and when it comes to the havoc wreaked by tsunamis, seismographic and sea-level monitoring stations and strategic city building will be key to resisting the effects of a changing climate, she said.

Knowing the signs of a looming tsunami has historically, been lifesaving. World Tsunami Awareness Day was the brainchild of Japan, which through bitter, repeated experience with tsunamis over the years, has built up expertise in early warning, and building cities to last.

“Tsunamis” meaning “harbour waves” in Japanese, can’t be predicted, and often come with little warning, but earthquake and ocean activity observation can help those in danger buy time.

Can you think of one single country which is not really experiencing any disasters?--UN disaster relief chief

During the 1854 Ansei earthquake in Japan, a farmer noticed a receding tide – one key sign of a looming tsunami. To warn villagers, he set fire to his entire rice harvest, and the people fled to safety on high ground. The earthquake foreshadowed a great tsunami which overtook present day Hirokawa Town, but the farmer’s actions spared hundreds of lives.

On the day for tsunami awareness, the world honours that Japanese story of “Inamura-no-hi”, or “burning of the rice sheaves”, and aims to promote the sharing of innovative approaches to tsunami risk reduction.

To mitigate disaster risks, UNDRR put forth a 15-year framework outlining seven clear targets to achieve substantial reduction of disaster risk and losses in lives, known as the Sendai Framework, adopted in Sendai, Japan, in 2015.

In 2019, the Day promotes the Framework’s target to reduce disaster damage to critical infrastructure and disruption of basic services, including hospitals and schools.

Around 90 per cent of disaster-related funding goes towards reconstruction and damage response, with only 10 per cent to prevention, Ms.  Mizutori said, “We have to find a way to change this 10-to-90 equation, it should be 90-10.”

Listen to our interview with Mami Mizutori on SoundCloud:

By 2040, $90 trillion will have been invested in protecting and building global infrastructure. To help ensure future cities are not overpowered by tsunami waves, “build where you should, don’t build where you shouldn’t. When you build, build to last, with measure for resilience”, Ms.  Mizutori stressed.

In addition, ensuring people have access to early warning education will spare lives, while hazards inevitably “continue to attack”, she said.

The United Nations Development Programme’s (UNDEP) implementation of tsunami drills in the Asia-Pacific region is one such example of disaster risk communication and prevention.

The initiative has so far involved 61,000 students, and 115 schools near the earthquake-prone “Pacific Ring of Fire”, home to more than 70 per cent of all tsunamis ever recorded.

Speaking at a commemorative event for the Day at UN Headquarters in New York, President of the General Assembly, Tijjani Muhammad-Bande,  explained that "over the past two decades, more than one quarter of a million people have lost their lives as a result of tsunamis. Today, we commemorate World Tsunami Awareness Day to remember these dear departed souls.

"To ensure that their loss was not in vain, today’s event serves as a call to action. I urge all Member States to adopt and implement disaster risk reduction strategies in order to safeguard future generations", he added. " I am confident that by striving together, we will succeed in delivering for all."

By 2030, half world’s population will be exposed to flooding, storms, tsunamis 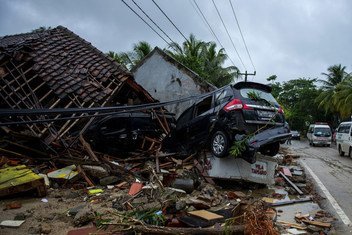 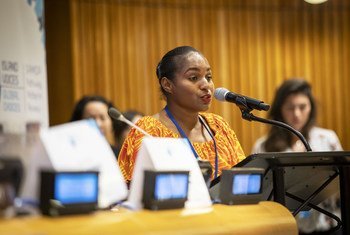 ‘We may be small islands, but no man is an island’, Papua New Guinea youth tells world leaders

“All of us from small islands can relate to the word’s perception of us, as small islands”, but rather than treating them as distant vessels, imagine instead “an undivided Pacific, connected by an ocean highway.” That was the plea to world leaders from Vinzealhar Ainjo Kwangin Nen, on Friday, speaking on behalf of her generation, on the front line of climate change.