UN-brokered face-to-face talks between the Syrian Government and opposition – the first to take place in nearly nine years of fighting – to draft a new constitution for the country, will continue into next week, the UN’s Special Envoy for Syria, Geir Pedersen, said on Friday.

The first phase of the talks, officially the “First Working Session of the Syrian Constitutional Committee Large Body”, began at the UN Office in Geneva on Wednesday, with Mr. Pedersen urging both sides, along with a third delegation representing Syrian civil society, to seize the “historic” opportunity of working together, for the sake of the Syrian people.

In a press statement, Mr. Pedersen said that Wednesday’s opening ceremony, which saw statements from co-chairs Ahmad Kuzbari and Hadi al-Bahra – representing, respectively the Syrian Government and opposition – had taken place in a “dignified and forward-looking manner”:

“We, of course, all know that after eight and a half years of conflict, there are deep differences, a lot of suspicion, and a lack of trust”, he acknowledged. “But the fact that 150 Syrians have been sitting together, respecting each other, talking to each other, discussing – according to the agenda that we agreed upon – the future of Syria, I think was quite impressive.”

The fact that 150 Syrians have been sitting together...discussing the future of Syria, was quite impressive – Geir Pedersen, UN Special Envoy for Syria

Mr. Pedersen described the ceremony as a “sign of hope for all Syrians that it might be possible to begin a new chapter for Syria”, and noted that the existing Syrian constitution could be re-examined, in line with UN Security Council resolution 2254, adopted unanimously on 18 December 2015, in New York.

On Friday night, Mr. Pedersen told the press that the 150-member Constitutional Committee had met over two days in working sessions, under the chairmanship of the two Co-Chairs.

All Committee members were invited to make opening statements, offering initial ideas on constitutional issues and suggestions for the drafting body.  The Committee also adopted a Code of Conduct for its members, and rules of procedure for the Co-Chairs.

Mr. Pedersen announced that, with these procedural issues out of the way, a smaller group had been agreed upon, made up of 45 members of the Committee, which will begin its first working sessions on Monday. These sessions are also scheduled to take place at the Palais des Nations in Geneva.

♦ Receive daily updates directly in your inbox - Subscribe here to a topic.
♦ Download the UN News app for your iOS or Android devices.
Geir Pedersen|syria|UN Special Envoy for Syria 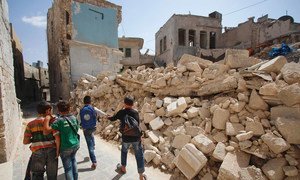 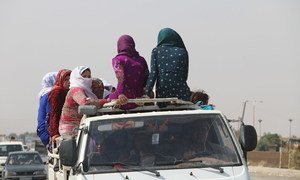