© UNHCR/Panos Moumtzis
The former UN High Commissioner for Refugees, Sadako Ogata, visited the Democratic Republic of the Congo in February 1995.

The first woman to serve as the UN High Commissioner for Refugees, Sadako Ogata, has died in Tokyo at the age of 92, hailed by the UN Secretary-General on Tuesday as a “role model for people across the world.”

António Guterres said he was “deeply saddened” to hear of her passing: “Sadako Ogata set the standard for helping refugees: principled, compassionate, effective.  She was fearless in her advocacy for people, humanitarian action and political solutions.”

“Mrs. Ogata was a visionary leader who steered UNHCR through one of the most momentous decades in its history, transforming the lives of millions of refugees and others devastated by war, ethnic cleansing and genocide” - @RefugeesChief Filippo Grandi pic.twitter.com/OHPx9ANYKa

As the first woman to lead the UN refugee agency, UNHCR, he said she had been “a pioneer in highlighting not only the impact of violence on women but the imperative of women’s involvement in solutions.  Her contributions continued long after her service as High Commissioner, in particular in articulating the concept of human security.”

Ms. Ogata, a Japanese national, led the agency between 1991 and 2000, which was “one of the most momentous decades in its history”, said the current UNHCR chief, Filippo Grandi. She oversaw major emergency operations in response to crises in the former Soviet Union, Iraq, the Balkans – especially Bosnia – Somalia, the Great Lakes, and East Timor, “as well as helping millions of refugees return home in large-scale repatriation operations in Central America”, the agency noted.

Mr. Grandi described her as a “visionary leader” and “committed internationalist, and a friend to the United Nations throughout her life…We at UNHCR extend deepest condolences to Mrs Ogata’s son Atsushi and her daughter Akiko, to all her family and to the Government and people of Japan for their great loss.”

UNHCR said she had been a tireless advocate for international solidarity with refugees, remaining in close touch after leaving the top job, and had pioneered the notion of “human security” and the use of development aid to help solve displacement, in her role as President of JICA, the Japanese International Cooperation Agency.

The UN chief said she had left “a unique legacy and imprint on the UN Refugee Agency, as I witnessed upon assuming leadership of UNHCR a few years later.  Many millions of people enjoy better lives and opportunities thanks to her solidarity and skillful work on their behalf.  And the many people today who have been forcibly displaced from their countries and homes are better served because of her achievements.

I am grateful to have known Sadako Ogata as both colleague and friend, and I offer condolences to her family, to the people and Government of Japan, and to her many admirers around the world.”

Watch an edition of the UN's former interview programme, World Chronicle, with Ms. Ogata, from 2005, where she discusses her memoir looking back on her decade in charge of UNHCR: “The Turbulent Decade, confronting the refugee crises of the 1990s”. 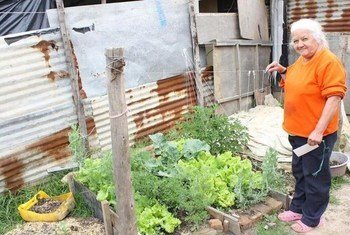 8 May 2013
Recognizing that today’s interlinked, complex challenges to well-being – from civil conflicts to climate change, financial crises and health pandemics – must be met in tandem, Secretary-General Ban Ki-moon and other leaders met today to consider practical ways to advance an integrated ‘human security’ framework for that purpose.