The Day marks the anniversary of the entry into force of the UN Charter in 1945, the founding document of the Organization, which, when ratified by the majority of its signatories, including the five permanent members of the Security Council, officially brought the United Nations into being.

Today we in @UNIFIL_ marked #UNDay. We reaffirm & fulfill our shared commitment to the cessation of hostilities & to remain on the path to #peace together w/ @LebarmyOfficial. Proud to be #ServingForPeace in #Lebanon, one of 51 founding members of @UN. #A4P #UN75 pic.twitter.com/nR3QvhhAg8

24 October has been celebrated as United Nations Day since 1948. In 1971, the United Nations General Assembly recommended that the day be observed by Member States as a public holiday.

“We are working for a fair globalization and bold climate action”, said the UN chief. “We are pushing for human rights and gender equality – and saying ‘no’ to hatred of any kind. And we are striving to maintain peace – while bringing life-saving aid to millions caught up in armed conflict”.

The Day is marked by celebrations at UN offices and missions around the world: a concert, live-streamed and available on demand at UN Web TV, took place at UN headquarters in New York, in the General Assembly Hall. The 2019 guest musicians are the Qatar Philharmonic Orchestra, with the participation of Dana Al Fardan, the country’s only female contemporary composer, pianist and composer Hala Al-Emadi, and singer Aisha.

The UN chief thanked Qatar for bringing the orchestra to UN Headquarters, describing the musical event as a traditional highlight, and  "an opportunity to remind ourselves, through music and art, of our shared humanity and the values we hold in common."

"At a time when inequality, discrimination and dehumanization are growing around the world", he added, "celebrating our diversity and recognizing how much we share with our fellow women and men is more important than ever."

Celebrations around the globe

This year, events were also scheduled to take place at the Paris headquarters of the UN Educational, Scientific and Cultural Organization (UNESCO), including a conference on sustainable cities.

In Lebanon, the UN Mission, UNIFIL, marked UN Day with a ceremony, involving high-ranking military personnel, including Force Commander Stefano del Col, to pay tribute to the more than 300 peacekeepers who have died whilst serving for peace in the south of the country.

And, in Bhutan, Natalie Kanem, head of the UN agency for family planning, UNFPA, took part in a tree-planting ceremony, which, she said, represented the planting of the seeds for a “future of rights & choices, health & dignity, peace & prosperity, for all”.

In his video message, Mr. Guterres looked ahead to next year’s 75th anniversary of the Organization, which he described as a milestone, and a “critical moment to shape our future, together”.

The commemoration of the 75 years will begin in January 2020, with dialogues held around the world, with the aim of involving the global public in a large and inclusive conversation, on the role of the UN in building a better future for all. 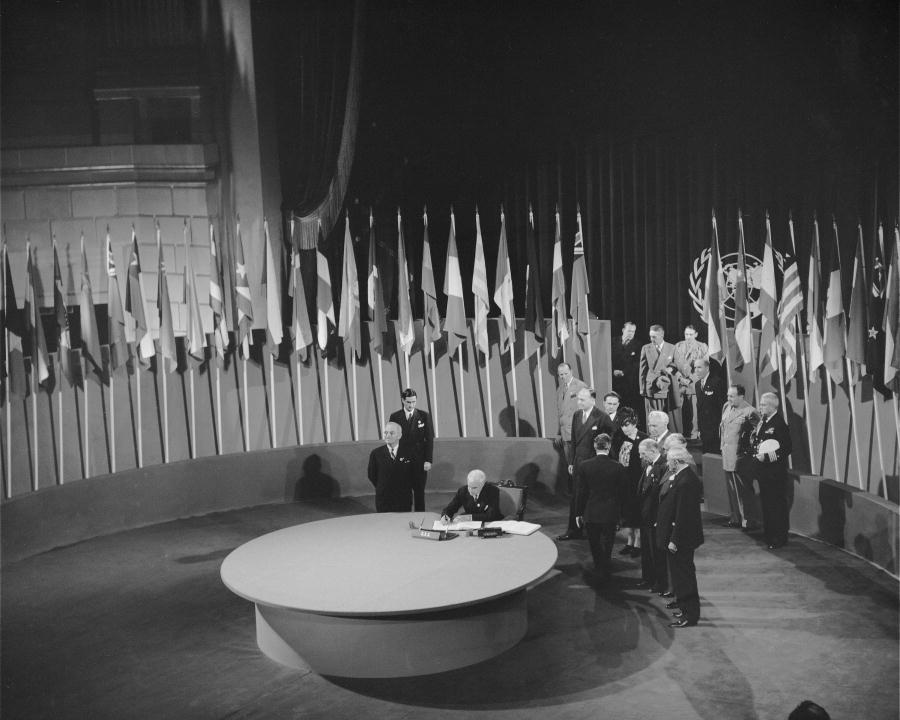 ♦ Receive daily updates directly in your inbox - Subscribe here to a topic.
♦ Download the UN News app for your iOS or Android devices.
UN Day