Authorities in Egypt are being urged by the UN human rights office, OHCHR,  to immediately release scores of citizens who have been arrested in connection with recent anti-government demonstrations in several cities.

Civil society groups report more than 2,000 people were detained before, during and after the protests on 20 September, which prompted the UN High Commissioner for Human Rights, Michelle Bachelet, to express concern about reports of lack of due process.

#Egypt: Arrests are continuing, incl. a number of civil society figures. We call on the authorities to respect right to peaceful assembly &amp; #FreedomOfSpeech: All those arrested &amp; detained solely for exercising their rights should be released immediately 👉 https://t.co/wtn6PYZpWv pic.twitter.com/Hj2wBQAVlh

On Friday her office reported that the arrests are continuing, with a number of well-known and respected civil society figures affected, some of whom have been accused of terrorism.

“Once again, we remind the Egyptian Government that under international law people have a right to protest peacefully, and a right to express their opinions, including on social media. They should never be arrested, detained – let alone charged with serious offences such as terrorism – simply for exercising those rights”, spokesperson Ravina Shamdasani told journalists in Geneva.

Ms. Shamdasani provided information about some of the detainees, who include Esraa Abdelfattah, a journalist and human rights defender based in the capital, Cairo, who was arrested on 12 October.

Plainclothes security officers took her to an undisclosed location where she reportedly was beaten for refusing to unlock her mobile phone. She was also allegedly forced to stand facing a wall for seven hours after her phone was unlocked through enforced use of her fingers or thumb, thus allowing it to be searched.

Ms. Abdelfattah appeared before a prosecutor the following day and was given 15 days’ detention pending investigation on charges that include collaborating with a terrorist organization and "defamation and the spread of false news".

“We call on the Egyptian authorities to promptly and effectively investigate any allegations of torture or ill-treatment in detention and to take effective legislative, administrative, judicial or other measures to prevent such acts”, Ms. Shamdasani said.

Prominent blogger Alaa Abdel Fattah as well as his lawyer, Mohammed El-Baqer are currently being held at the Tora Maximum Security Prison, south of Cairo.

Both have been accused of belonging to a terrorist group, funding terrorism, spreading false news that undermines national security and “using social media to commit publishing offices”, the UN human rights office said.

Mr. Abdel Fattah has been arrested and jailed previously. He was released from prison in March 2019 after serving a five-year sentence for organizing a protest without permission and is required to spend each night in a prison cell.

Security forces arrested Mr. Abdel Fattah on 29 September when he reported to a Cairo police station to fulfill his probation conditions. He allegedly was blindfolded, forced to strip down to his underwear and walk down a prison corridor while being beaten on his back and neck.

Mr. El-Bager was arrested that same day while attending his client’s interrogation at the State Security Prosecution. Since that time, he allegedly has been subjected to physical and verbal abuse, in addition to being denied access to drinking water, sanitation and medical assistance.

“All those arrested and detained solely for exercising their rights, or lending legal assistance to others who have been arrested, should be released immediately,” Ms. Shamdasani stated.

OHCHR also called on the authorities to “promptly and effectively” investigate any allegations of torture or ill-treatment. 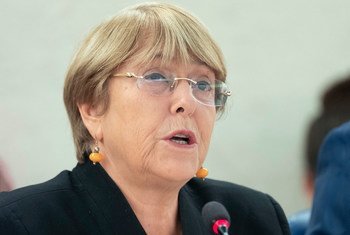