UNHCR is calling on all sides to respect international human rights law, which includes providing access to aid agencies supporting people in need.

“Hundreds of thousands of civilians in northern Syria are now in harm's way. Civilians and civilian infrastructure must not be a target,” UN High Commissioner for Refugees Filippo Grandi said.

UNHCR warns that the situation risks causing more suffering in addition to adding to what is already the largest displacement crisis in the world, with more than five million Syrians living as refugees while another six million are internally displaced.

The head of the UN Children’s Fund (UNICEF), has also expressed concern over the latest developments in the war-torn country, stemming from Sunday’s decision by the President of the United States, Donald Trump, to withdraw US troops from the region.

US forces have been working alongside Kurdish militia for years, known as the YPG, which Turkey regards as terrorists.

UNICEF Executive Director Henrietta Fore said “a military escalation would have dramatic consequences on the ability of humanitarian actors to provide assistance and protection to thousands of vulnerable children.”

Furthermore, any new military campaign may lead to insecurity and chaos which could create circumstances for the resurgence of the extremist group ISIL, or Daesh, according to the members of the Independent International Commission of Inquiry investigating violations committed in the eight-year long Syrian crisis.

“The last thing Syrians need now is a new wave of violence,” they stated.

The Commissioners said more than 100,000 previously displaced people, most of whom are women and children with presumed links to ISIL fighters, are lingering in makeshift camps “with limited access to basic services and at risk of radicalization in the absence of age and gender-sensitive rehabilitation programmes.”

♦ Receive daily updates directly in your inbox - Subscribe here to a topic.
♦ Download the UN News app for your iOS or Android devices.
syria|UNHCR|UNICEF 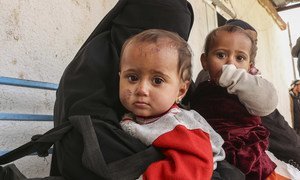