WHO
World Mental Health Day 2019 focuses on raising awareness of the scale of suicide around the world and the role that each of us can play to help prevent it.

Worldwide, 800,000 people die by suicide each year - one every 40 seconds - making it the second leading cause of death among young people (aged 15 to 29), the World Health Organization (WHO) said on Thursday, spotlighting suicide prevention as the theme for this year's World Mental Health Day.

“Mental health has been neglected for too long,'' Secretary-General António Guterres said in a video message for the Day, saying it needs to be addressed urgently, as a matter "that concerns us all.”

“We need stronger investments in services. And we must not allow stigma to push people away from the assistance they need. I am speaking my mind because I care deeply” he said, “there is no health, without mental health.”

The World Health Organization (WHO), supporting this year’s international Day, has said that each year, the proportion of suicides accounts for more deaths than war and homicide combined.

A well-established link exists between mental health and suicide in developed countries, and the trauma from experiencing disaster, violence and abuse, are also strongly associated with suicidal behavior, according to the agency’s latest figures, published last month, ahead of World Suicide Prevention Day.

In the past, the United Nations and partners have drawn attention to different aspects of mental health on the World Day, from mental health in relation to children, the workplace, stigmatization of issues, and psychological first aid - or ways in which to lend support to the distressed.

This year, WHO and global partners are echoing the call of September’s World Suicide Prevention Day through promotion of the “40 seconds of action campaign”, aimed at raising awareness of suicide around the world, and methods of prevention.

To date, only a few countries have included eliminating suicide among their health priorities, and only 38 report having a national prevention stategy, WHO reports. Though suicides are preventable, stigma and taboo surrounding mental health have not been addressed in many societies.

Reduction measures can be taken by individuals and society at large, to prevent suicide and suicide attempts - here are some of WHO's recommendations:

In a move to ensure a healthy work environment for its staff, the United Nations implemented a framework  of mental health resources best practices for its thousands of staff, in 2018.

WHO’s Mental Health Gap Action Programme (mhGAP), launched globally in 2008, serves as an evidence-based guide to scale up services for mental, neurological and substance use disorders.

In a joint mission targeting youth, WHO in partnership with the UN Children's Fund (UNICEF) will convene a global conference on child and adolescent mental health  next month, on 7 November.

World experts and young advocates are set to gather for a three-day consultation in Florence, Italy, to address growing gaps in mental health services for children and young people. Worrying data shows suicide as the leading cause of death among youth aged 15 to 19.

Listen to an exclusive interview on mental health at the UN with  Fabrizio Hochschild, the UN Assistant Secretary-General for Strategic Coordination: 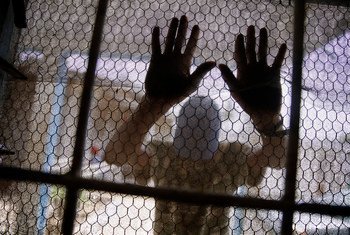 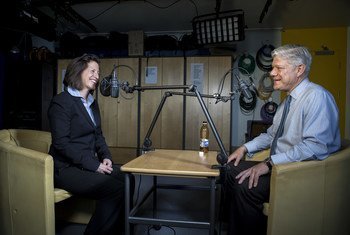 FROM THE FIELD: facing up to the extreme mental health pressures of conflict

For those caught up in conflict situations, the trauma can lead to severe mental health problems. This is also the case for the humanitarian workers who are trying to help them.