“The time has come for the urgent mobilization to support countries and people of the Sahel,” UN chief António Guterres said on the margins of the UN’s 74th General Assembly.

The meeting hosted a discussion around the implementation of priority measures, and recent operations to strengthen international and regional support, such as the Security Council’s renewed mandate for Mali’s UN peacekeeping mission (MINUSMA) to promote peace and security there.

Partners should “ensure prompt disbursement of the funds committed and to support the implementation of the UN’s Integrated Strategy for the Sahel”, the UN chief urged. The 2013 plan, endorsed by the Security Council, prioritizes life-saving activities to meet immediate needs, and provides a framework for resilience-building.

“A significant portion” of the $2.3 billion to prioritize G-5 operations, pledged at a donor conference last December, “has not yet been disbursed”, and “this year, just one fifth of the necessary humanitarian funds have been received so far,” Mr. Guterres lamented.

A disrupted peace process and lawlessness in the northern and central regions, has left more than 100,000 people displaced within Mali, 220,000 in Burkina Faso, and 400,000 in Niger - a transnational crisis which the UN chief described as “a regional threat”.

What youth and adults alike need, is “a perspective that goes beyond their daily needs”, he said, “to ensure development, promote gender equality, and ensure access to economic opportunities and social services.”

♦ Receive daily updates directly in your inbox - Subscribe here to a topic.
♦ Download the UN News app for your iOS or Android devices.
Sahel Region|MINUSMA|peacekeeping 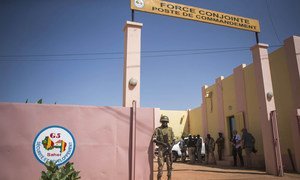