Banks collectively with more than $47 trillion in assets, or a third of the global industry, signed up on Sunday to new United Nations-backed responsible banking principles in a massive boost for climate action and the shift from “brown to green” models of economic growth.

In the Principles, launched one day ahead of the UN Climate Action Summit in New York, banks commit to strategically align their business with the goals of the Paris Agreement on Climate Change and the UN Sustainable Development Goals (SDGs), and massively scale up their contribution to the achievement of both.

“The UN Principles for Responsible Banking are a guide for the global banking industry to respond to, drive and benefit from a sustainable development economy,” UN Secretary-General António Guterres said at the launch event, adding that they also “create the accountability that can realize responsibility, and the ambition that can drive action.”

By signing up to the Principles, banks said they will among other goals, aim to “increase our positive impacts, while reducing the negative impacts, and managing risks to people and the environment from our products and services.”

“How you, as business leaders, respond can be a defining moment for our global goals. Only public-private cooperation can deliver sustainable development,” Mr. Guterres said.

He challenged the 130 Founding Signatories and over 45 of their CEOs gathered for the event to not only align their business goals with the SDGs, the UN’s blueprint for tackling poverty, protecting the environment and ensuring a fairer world for all, but also to support gender equality, to invest in climate action and to disinvest from fossil fuels and pollution in general.

“We will rely on you to scale up financing to businesses that stimulate green growth,” the Secretary-general said, adding: “Place your bets on the green economy, not the grey economy, because the grey economy will have no future.”

Picking up that thread, Inger Andersen, Executive Director of the UN Environment Programme (UNEP), told the bankers: “When the financial system shifts its capital away from resource-hungry, brown investments to those that back nature as solution, everybody wins in the long-term.”

The Principles were developed by a core group of 30 Founding Banks through an innovative global partnership between banks and the UNEP Finance Initiative (UNEP FI).

While action on climate change is growing, it is still far short of what is needed to meet the 1.5°C target of the Paris Agreement. Meanwhile, biodiversity continues to decline at alarming rates and pollution claims millions of lives each year.

Against this background, UNEP says that more ambition, backed by a step change in investment from the private sector, is needed to tackle these challenges and ensure that humanity lives in a way that ensures an equitable share of resources within planetary boundaries.

The banking and private sectors can benefit from the investment they put into backing this transition. It is estimated that addressing the SDGs could unlock $12 trillion in business savings and revenue annually and create 380 million more jobs by 2030. 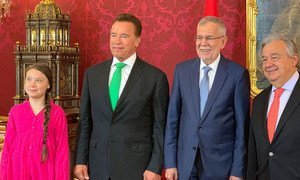