World leaders attending the upcoming UN Climate Action Summit are being urged to show up armed not with speeches but with plans to achieve carbon neutrality, reduce emissions and improve adaptation.

UN Secretary-General António Guterres issued the charge on Friday during a visit to The Bahamas, which continues to reel from the onslaught of Hurricane Dorian. UN agencies are on the ground to support relief efforts in the affected islands of Abaco and Grand Bahama.

The @UN chief @antonioguterres is in The Bahamas calling for more international support to overcome crippling impact of #HurricaneDorian - it's another sign of #ClimateCrisis, with most vulnerable worst hit: pic.twitter.com/4cDrHPqPrG

Speaking to journalists in the capital, Nassau, the UN chief expressed international solidarity with the Government and people of the island nation.

“In some areas, more than three-quarters of all buildings have been destroyed, hospitals in ruins or overwhelmed, schools turned into rubble. Thousands of people will continue to need help with food, water and shelter, and many more facing the uncertainties of the future after having lost everything,” he said.

Mr. Guterres noted that the climate crisis has generated “turbocharged” hurricanes and storms, which are occurring with greater intensity and frequency. And without urgent action, climate disruption will only get worse, packing what he described as “a triple punch of injustice.”

“First, the worst impact is on countries with the lowest greenhouse emissions; The Bahamas are a very good example of that.  Second, it is the poorest and most vulnerable people in those countries who suffer most, and again, the same has happened with the communities in The Bahamas. And third, repeated storms trap countries in a cycle of disaster and debt.”

While the financial cost of Hurricane Dorian has not yet been determined, Mr. Guterres estimated it will be in the billions of dollars.

“The Bahamas cannot be expected to foot this bill alone. These new large-scale climate-related disasters require a multilateral response.  Climate financing is one element,” he said.  “We must reach the target of $100 billion per year from public and private sources, for mitigation and adaptation in the developing world, as rich countries have been promising for nearly a decade. And we must improve access to development financing. In cases like the Bahamas, I strongly support proposals to convert debt into investment in resilience.”

Above all, Mr. Guterres called for greater global action.

I was deeply moved by my visit to a shelter for people displaced by #HurricaneDorian where I heard terrible stories from those who lost loved ones or have no place to go.
I was also touched by the dedication & compassion of the humanitarians helping them.https://t.co/4y2QBKZU1T pic.twitter.com/LYuvppqIfP

“The entire international community must address the climate crisis through rising ambition and action to implement the Paris Agreement. The best available science, as reported by the Inter-governmental Panel on Climate Change, says we must ensure collectively that global temperature rise does not go beyond 1.5 degrees.  And it says we have a window of less than 11 years to avoid irreversible climate disruption and that we must reduce emissions by 45 per cent by 2030 and achieve carbon neutrality by 2050,” he continued.

“And this is why I am asking all leaders to come to the climate summit with plans, not speeches, in New York in one week’s time.”

Visiting a shelter for hurricane evacuees later in the day, the UN chief met many who were also refugees from Haiti, and higlighted the generous support that had been given to them by the Bahamian Government and people.  The presence of so many vulnerable refugees showed how important international support was, " in order to help the Bahamas cope not only with the impact of the storm, but also with need to be able to assist populations that are very vulnerable of foreigners living in the country, many of them undocumented".

Asked what the UN's key role is in response to the hurricane now, he said that intensifying the international effort was key, "because there is a lot of immediate aid that's necessary and there is reconstruction that will require also that solidarity. And at the same time, we all need to do everything we can to reduce the risks that have had such a tragic impact in the Bahamas and (the) means to fight climate change effectively." 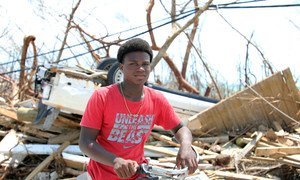 “The clock is ticking” for Hurricane Dorian survivors in the Bahamas to receive humanitarian assistance, the top United Nations Children’s Fund (UNICEF) official in the region said on Sunday.