© European Union 2017 (photographer: Anouk Delafortrie)
In drought-stricken regions in Somalia, families are abandoning their homes and heading for cities or enclaves where aid is available. (28 March 2017)

Somalia’s 2019 cereal harvest is the poorest the country has seen since 2011, when famine strained already scarce resources, the Food and Agriculture Organization (FAO), announced on Tuesday, blaming unreliable weather patterns and “climatic shocks”.

Delayed rains during what is known as the “Gu” peak season for crop growing (April-June), and parched river beds, have produced harvest levels up to 70 percent below average in some parts, according FAO’s Food Security and Nutrition Analysis United (FSNAU) latest data report, with severe hunger looming for more than 2 million people in desperate need.

“In the absence of humanitarian assistance, up to 2.1 million people across Somalia face severe hunger through December,” the UN warned, citing the 2019 Post-Gu report’s conclusion that this would bring the total number of Somalis expected to be food insecure, to 6.3 million by year’s end.

The problem goes back to 2018, when poor October-December rains preceded a harsh dry season early this year. Unpredictable rainfall, followed by drought conditions during April and early May resulted in significant crop and livestock production shortfalls for July, which account for about 60 percent of Somalia’s total cereal output, according to FAO’s most recent country analysis.

These “climatic shocks” the UN said, “coupled with widespread poverty and vulnerability, are key drivers that have trapped millions of Somalis in severe hunger and malnutrition.”

The figure is more than 40 percent higher than food insecure population estimates by FAO from just the beginning of this year, with an estimated 2.6 million people internally displaced, and living in makeshift settlements outside urban areas, facing hunger. “If interventions are not scaled up,” the UN stated, “one million children are projected to be acutely malnourished over the next year, including 180,000 who are likely to be severely malnourished.”

Though climatic shocks exacerbate needs, they “do not have to lead to large-scale catastrophe”, said Minister of Humanitarian Affairs and Disaster Management for the Government of Somalia, Hamza Said Hamza.

“We must continue to work collectively to strengthen the capacity of Somalia to withstand these climatic shocks and identify durable solutions.”

Rainfall predictions indicate 45 to 55 percent probability of above average precipitation for the next “Deyr” cropping season, from October to December, the UN reported; meaning a wetter season which “will be crucial to avoid a deterioration of the food security situation in Somalia.”

The Humanitarian community and Somali Government jointly launched a Drought Response Plan (DIRP) to cover June through December 2019, however the $487 million in funding received so far meets less than half of the requirement.

The nation’s acting Humanitarian Coordinator, George Conway, urging additional resources and a more collective response from donors, saying that“humanitarian partners stand ready to respond, by they cannot do so without sufficient resources. 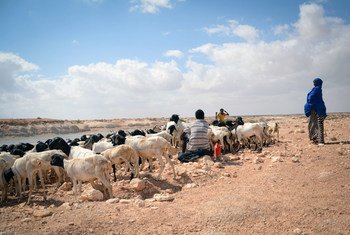 The construction of sand dams which retain water above and below sand bars, is improving access to water supplies for people in Somalia as the country continues to weather periods of damaging drought.