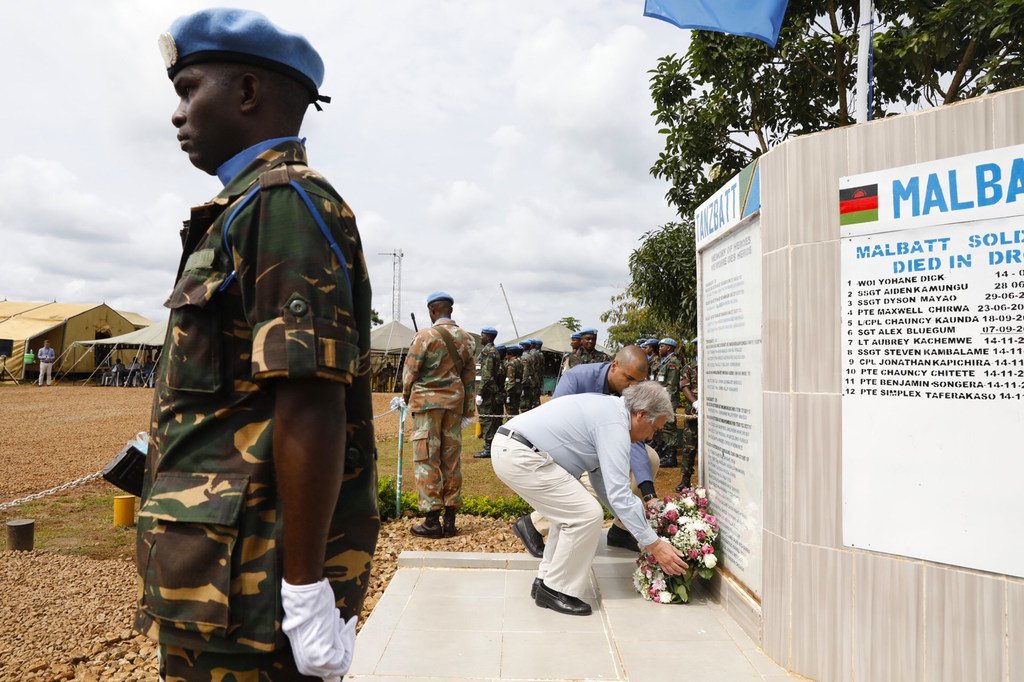 UN/Martine Perret
The UN Secretary-General António Guterres lays a wreath for fallen peacekeepers in Mavivi town in the eastern Democratic Republic of the Congo on 1 September 2019.
1 September 2019
Peace and Security

Temperature check for @antonioguterres upon arrival in Mangina, DR Congo, where the Ebola epidemic started 13 months ago. pic.twitter.com/WOZkICa0qL

Mr. Guterres was speaking at a press conference on Sunday, in the town of Beni, which is at the epicentre of the country’s deadly Ebola epidemic, where, he said, the people of the region are also facing other serious problems, such as measles, malaria and cholera, as well as insecurity.

Speaking in French, he said “I hope that my presence here today reaffirms my full support for MONUSCO [the UN stabilization mission in the country], in the fight against armed groups who spread fear and death. MONUSCO, and its partners – the armed forces of RDC, and the Congolese national police – continue to work together to bring peace and security to the region”.

The UN chief went on express his condolences to the families, and loved ones, of the victims of violence, and called on all armed groups to immediately end their attacks on the civil population, and the security forces charged with protecting the Congolese people.

"The blue helmets have paid a heavy price in the service of peace. But this only strengthens our determination. We will do all that we can to put an end to the scourge of insecurity in this region. It is important that the people of Beni knows that we hear the cries of distress”.

The United Nations system is determined to support the Congolese authorities, local communities and civil society actors, added Mr.Guterres, in the fight against insecurity, and that he will raise the subject with the national authorities in the capital, Kinshasa, on Monday.

The Secretary-General also visited the Mangina Ebola Treatment Centre on Sunday, where he expressed his admiration for the resilience of the community, and pointed out the central importance of security to tackling the disease.

“To fight Ebola, we need freedom of movement, we need access, we need security”, he said, “And our solidarity must be expressed through increased cooperation between MONUSCO and the Armed Forces of the DRC, to do everything possible to convince them to reintegrate into society”.

The countries and organizations that have made financial commitments to support the Ebola response must, said Mr. Guterres, honour their promises, so that the response can continue, uninterrupted, in all affected areas.