Mr. Guterres arrived in the town of Goma, situated in the North Kivu region of the country which is at the centre of the epidemic, on Saturday. There, he was received by Leila Zerrougui, his special representative in the country, and inspected a contingent of UN peacekeepers. The UN chief thanked them for their service and sacrifice, and for putting their lives at risk, in often dangerous conditions, to protect civilians.

I’m very proud of the work of our UN peacekeepers in the Democratic Republic of Congo – putting their own lives at risk in often dangerous conditions to protect civilians. I thank them for their service &amp; sacrifice. pic.twitter.com/2MoY5gUuJ4

Jean-Pierre Lacroix, Under-Secretary-General for Peace Operations, who described the high-level visit as an opportunity to reiterate support for efforts towards peace and stability in the country, joined Mr. Guterres on the trip. He declared that the entire United Nations system, including the UN Mission in DRC, MONUSCO, is fully committed to ending the Ebola epidemic.

Civilians in DRC are also dealing with the deadly effects of other diseases, such as measles and malaria, which both claim more victims than Ebola, reminded Tedros Adhanom Ghebreyesus, Director-General of the World Health Organization (WHO). Mr. Tedros, part of the official UN delegation, said that this is why investments in a health system based on primary health care are so important, to address all health needs in a comprehensive way.

Speaking in French to local media on Saturday, Mr. Guterres expressed his admiration for the resilience of the citizens of DR Congo, and underlined the solidarity of the United Nations in the fight against terrorism, not only in Congo, but across the whole continent of Africa, and the entire world.

Turning to the "terrible situation” of Ebola, and other major health concerns such as measles, malaria, and cholera, the UN chief promised that the UN stands “side-by-side with the Congolese authorities and the people of the country, in order to do our best to meet all of these challenges.”

During his visit, his first since taking up office as the head of the UN in January 2017, Mr. Guterres will meet senior government officials, actors in the DRC peace process, and the civilian, police and military members of the UN Mission in the country.

Other senior UN officials joining the Secretary-General include Huang Xia, UN Special Envoy for the Great Lakes; Matshidiso Moeti, WHO Regional Director for Africa; Mike Ryan, Executive-Director of the WHO Health Emergencies Programme; and Ibrahima Socé Fall, WHO Assistant Director-General of Emergency Response. 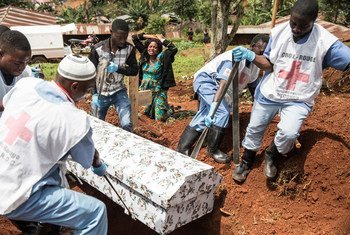 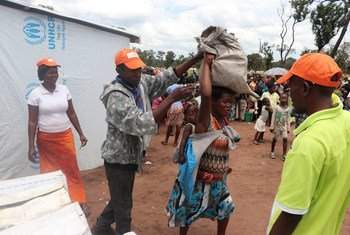 As security has improved in the restive Kasai region of the Democratic Republic of Congo (DRC), some 8,500 refugees have left the Lóvua settlement in Angola’s north-east Lunda Norte province in the past week, hoping to cross the border and return home, according to the UN refugee agency.