UN Photo/Mark Garten
Visitors throw white flowers into Rio de la Plata as a symbol of respect at the Parque de la Memoria during a memorial in Buenos Aires to the victims of Argentina's so-called "Dirty War". (2016)

A recap of Friday's stories: Over half of refugee children missing an education; new Ebola case in Uganda; funding gap in Yemen leaves many at risk; Timor-Leste marks 20th anniversary of independence, enforced disappearances spread terror 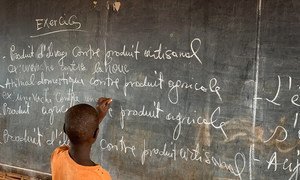 Millions of refugee children are missing out on an education, the UN said on Friday, in an appeal to host countries to prevent them from “languishing” in camps for years where they lose hope.

According to a UN refugee agency (UNHCR) report, out of 7.1 million refugee youngsters of school age, more than half don’t attend lessons.

The problem gets worse as they get older, with six in 10 refugee children attending primary school and only two in 10 benefiting from secondary education. 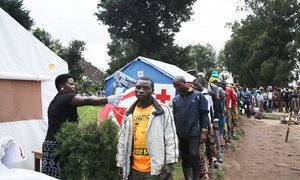 As the number of Ebola virus epidemic infections continues to climb in the Democratic Republic of the Congo (DRC), a new case of the disease has been identified in neighbouring Uganda, the World Health Organization (WHO) said on Friday.

In June, two people died from Ebola in Uganda after they had crossed the border from eastern DRC. A third individual from the same family died after he was sent back to DRC.

Speaking in Geneva, WHO spokesperson Fadela Chaib confirmed that the individual, a child, had been stopped in a routine border check at Mpondwe in western Uganda, reportedly on Wednesday.

“This girl is aged nine years old…she’s a Congolese girl, so she’s from DRC. She was tested positive for Ebola in Uganda and she came to seek help from DRC to seek medical care on a motorbike.”

The situation in Yemen is “very fragile”, the top United Nations humanitarian official there has warned, noting that as many as 13 people have been killed and at least 70 wounded over the past three days during clashes in two governorates.

“Families are again trapped in their homes by fighting, unable to secure food and reach medical care,” said Lise Grande, Humanitarian Coordinator for Yemen, said on Thursday, referring to Aden and Abyan. 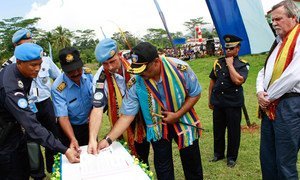 Twenty years since a people’s vote put Timor-Leste “firmly on the path of independence”, Mr. Guterres extended his congratulations to the country for its “tremendous achievements”.

In a statement issued by his Office to coincide with the anniversary, the Secretary-General cheered the fact that the country has held four peaceful elections, built new institutions, grown the economy and laid the “foundations for reconciliation, democracy and stability”.

Timor-Leste’s independence from Indonesia was recognized in 2002 and overseen by UN peacekeepers, to prevent further bloodshed amid clashes between opponents of the popular vote. 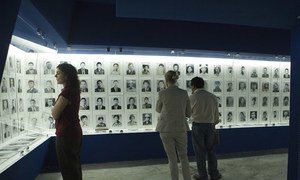 On Friday, the world marked the International Day of the Victims of Enforced Disappearances, as it recognized that this has been frequently used as a strategy to spread terror.

“Enforced disappearance can be misperceived as an issue of the past, but many cases remain unresolved and new ones continue to arise”, Secretary-General António Guterres said in his message for the day.

Uncertainty as to the whereabouts and fate of a friend, family member or loved one causes great psychological distress.

Noting that these disappearances “have a profound impact on the lives of those searching for the victims”, the UN chief maintained “we must end this suffering”.

The Committee and the Working Group on Enforced Disappearances – the UN’s key mechanisms to address this matter – receive new cases daily, “many in the context of the fight against organized crime and terrorism”. Pointed out Mr. Guterres.

Listen to or download our audio News in Brief for 28 August on Soundcloud: