©UNICEF/Kate Brooks
Traveling with his family via an unofficial border crossing from Syria to Lebanon, the nine-year-old boy pictured here was injured during an unidentified explosion; abrasions from the explosion are also visible on his face.

Noting that he has briefed “many times over the last few months”, Mark Lowcock, the UN Emergency Relief Coordinator, said that “three million people – two-thirds of them women and children – are counting on your support to make this violence stop”.

According to “conservative estimates” in the Secretary-General’s latest report, he revealed that “more than 500 civilians had been killed and many hundreds more injured” in northwest Syria since late April.

Most recently, 44 civilians were killed by airstrikes between 16 and 18 August, 15 others on Monday and 17 more just yesterday.

“Over the last three weeks, since the collapse of the conditional ceasefire on 5 August, dozens of communities have emptied out in northern Hamaand southern Idlib”, he stated.

“Satellite imagery shows that entire towns and villages have been razed to the ground,” he said, adding that many fled northwards closer to the Turkish border and those who stayed behind “are cowering in basements or in what’s left of their homes”.

And yet, despite the many challenges, “the humanitarian community is doing everything it can to respond to the needs” of the people in and around Idlib, Mr. Lowcock said, elaborating that some 15,000 aid workers continue to provide shelter materials, food assistance and health services, including for newly displaced people.

More than a million people who receive general food assistance every month are reached exclusively through a cross-border operation because “access from within the country is impeded,” the UN Humanitarian Coordinator stated.

Turning to Rukban, Mr. Lowcock said dire conditions and lack of assistance, coupled with the hope for durable solutions, have led many people to leave.

And per a UN agreement with the Syrian authorities, a mission is planned to help those who wish to leave find for shelters in Homs.

“All movement must be voluntary, safe, well-informed and dignified, with humanitarian access assured throughout”, assured Mr. Lowcock.

In Al Hol, “there are currently some 68,600 people in the camp”, living in extremely difficult conditions, he informed. “Most have been exposed to violence and trauma under ISIL”.

He mentioned that the United States and Turkey plan to coordinate a so-named “safe zone” in the country’s north-east, for which the UN is not a party, and emphasized that the welfare of civilians must be insured, including by guaranteeing “unimpeded and safe humanitarian access to civilians in need”.

“The UN and humanitarian agencies run a large relief operation all across Syria, reaching six million people”, including humanitarian assistance, he stated, however, with “significantly less” funding this year, he asked those who pledged at the Brussels conference in April “to take early action to implement them”.

Acknowledging that “we cannot turn back the clock on what has happened”, Mr. Lowcock underlined that “this Council and its members can take meaningful action now to protect civilians and ensure full respect for international humanitarian law.

“It is within your power to do that”, he concluded.

For his part, Geir Pedersen, UN Special Envoy for Syria, flagged that the scale of violence and instability in Syria is “extremely alarming”.

He painted a grim picture of rising civilian death tolls; millions displaced; untold tens of thousands detained or missing; large territories fragmented between different actors; and ISIL terrorists stepping up guerrilla attacks, saying “and not yet the launch of a real political process”.

“These dynamics can and must change”, he stressed as he highlighted five of the current dangers beginning with resumed hostilities in and around Idlib, in the country’s north-west, where three million civilian lives are at risk.

He next turned to Syria’s north-east, where tensions flared in July with troop concentrations on the Turkish side of the border.

Thirdly, he spoke about Israeli-Iranian tensions that are putting the country in the crosshairs by planning drone attacks from Syrian soil.

Turning to the country’s south-west, he warned of reports of detentions, demonstrations, disappearances and assassinations.

“There is no military solution for Syria”, Mr. Pedersen underscored. “Only a political process and ultimately a political solution can restore Syria’s sovereignty, protect the rights and future of all Syrians, and begin to address the deep divisions within Syrian society”.

There is no military solution for Syria – UN Special Envoy

Amid surging violence and lagging political progress, he spoke of a constitutional committee in Geneva, maintaining that “to be a meaningful door opener…that turns the page towards a new Syria” it should be “accompanied by measures that have real impact on the ground”, pointing to “real action on detainees, abductees and missing persons” as being “such a measure”.

According to the UN envoy, “international players have the responsibility to deepen their dialogue too” and support the UN “as we work directly with the Syrian parties.”

“If the Syrians are to overcome their mistrust and division, and move step-by-step along a path to heal Syrian society and restore Syria’s place in the international community, a common international support format for Geneva will be absolutely key”, he stressed.

In closing, he asked for Council’s support “in making this happen”. 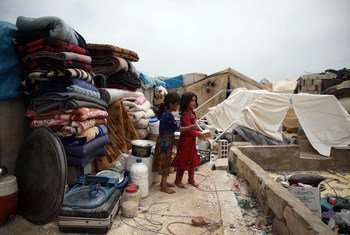 An attack in the south of Syria’s restive Idlib province that led to the deaths of a paramedic, an ambulance driver and a rescue worker, were added to the grim total on Thursday of more than 500 civilian fatalities documented in the country by the United Nations, over the past three and a half months alone. 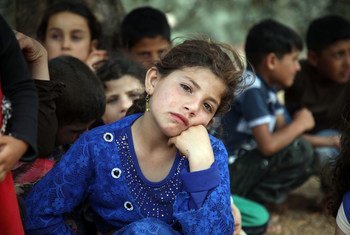 Following the collapse of the latest truce in Idlib at the start of this week, the Senior Humanitarian Adviser to the UN’s Syria Envoy urged Member States on Thursday to increase their support for “critical humanitarian needs” in the country’s last opposition-held enclave.