UN Photo/Mark Garten
Greta Thunberg, the 16-year-old climate activist from Sweden, sailed into New York Harbor today flanked by a fleet of 17 sailboats representing each of the Sustainable Development Goals on their sails.
28 August 2019
Climate Change

Refusing to take a gas-guzzling plane, the Swedish teen decided on a zero-carbon mode of transportation to further bring awareness to the dangers of rising global emissions and pollution caused by human activity.

The @UN has sent out one boat for each of the 17 sustainable development goal to greet us! Thank you! pic.twitter.com/AU5ZSVj5vD

Despite the tight quarters and lack of creature comforts, she sailed with her father, a two-man crew and a cameraperson on the 60-foot Malizia II racing yacht with solar panels and underwater turbines that generated electric power.

To show appreciation and solidarity for her mission toward a better world by 2030, the UN greeted the sixteen-year-old at the Verrazano Narrows Bridge with a flotilla of 17 sailboats.

“The UN has sent out one boat for each of the 17 Sustainable Development Goals (SDGs) to greet us!” she tweeted “Thank you!”

“We welcome Ms. Thunberg and wish her a pleasant stay after a long journey across the seas”, Stephane Dujarric, Spokesperson for the Secretary-General, told reporters in New York.

The flotilla met Ms. Thunberg at the Verrazano Narrows Bridge, which links the New York City boroughs of Staten Island and Brooklyn.

The boats accompanied her to North Cove Harbor in Manhattan to show appreciation and solidarity for her mission to mobilize support for action to achieve SDG 13, on climate action,as well as the other 16 goals for a better world by 2030, unanimously adopted by world leaders at the UN in 2015.

“They are leading the kind of transformative change needed to drastically reduce carbon emissions to protect our planet and ensure the wellbeing of people,”

Warning that “time is running out”, Ms. Mohammed affirmed that the UN is “proud to host hundreds of young activists and leaders, including Greta, who are answering the Secretary-General’s call to bring solutions to the Youth Climate and the Climate Action Summits”.

“Our individual and collective actions will transform our world, save lives and ensure a life of dignity for all”, maintained the UN deputy chief.

The Climate Summit aims to mobilize political and economic ambition at the highest levels to advance climate action and enable many of the 2030 Agenda for Sustainable Development.

Stepping onto dry land for the first time in two weeks, Ms. Thunburg said at a press conference: “I would love not to have to do this and just go to school, but… I want to make a difference”.

Pointing to “the older generation” as causing the climate crisis, she stated that they “should not be saying to us ‘be a normal kid’ [because] we are just trying to clean up after them.”

The young environmental campaigner has been captivating people around the world since she waged a one-girl ‘school strike’ for climate action last August.

At that time, the then 15-year old stood by herself in front of the Swedish Parliament with a demonstration sign, calling for bold climate action.

As she began drawing media attention, other students followed her lead and began staging similar protests in their own communities. 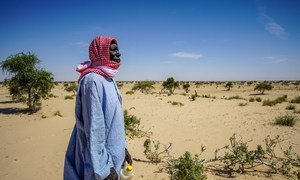 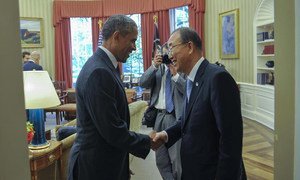 The United Nations counts on the leadership and support of the United States on a range of critical issues, from climate change and sustainable development to resolving crises such as those in Syria and Yemen, Secretary-General Ban Ki-moon said today, following a meeting at the White House with President Barack Obama.