© FAO/Alessandra Benedetti
Women attending an event organized by Saudi Arabia at the UN in Rome, Italy. (2019)

Allowing Saudi women to apply for passports and travel without their guardians’ permission is “an encouraging move” towards the “complete abolition of the ‘guardianship’ system,” independent United Nations rights experts said on Thursday, but more action is needed to fully dismantle these restrictions.

“Any progress will remain very frail unless accompanied by wider reforms and by measures to ensure that rights are reflected and enshrined in the constitution of the Kingdom of Saudi Arabia and not solely through royal decrees,” the six experts said in a joint statement.

Saudi Arabia loosened some social restrictions on women in 2017. And now, by Royal decree, Saudi women will be able to apply for passports. Those over 21 will be allowed to travel independently – without permission from their so-called guardians – by the end of this month.

According to news reports, while human rights advocates have welcomed the move, they have also noted that women still require the permission of a male relative to marry, or leave women’s shelters, and some rights activists remain on trial or in detention for campaigning to change the system.

“We should not forget that these positive developments are the result of years of relentless advocacy and effort of many human rights and women’s rights defenders in Saudi Arabia”, underscored the independent UN experts, calling “for their immediate release”.

Women “continue to face numerous restrictions” under a guardianship system that “negates their fundamental human rights and their dignity as autonomous human beings”, according to the experts.

Giving men arbitrary authority over their female relatives results in discrimination against women.

“It severely impairs women’s equal participation and decision-making in political, economic and social affairs and the enjoyment of their human rights including the rights to freedom of movement, education, work, access to justice, privacy and family life,” they stressed.

The Special Rapporteur on Privacy, Joseph Cannataci, expressed his grave concern over the technological tools and apps that extend male guardians’ control over women through the digital sphere.

“I am particularly concerned about the use of the Absher mobile phone app that allows male ‘guardians’ to monitor, restrict and control women’s whereabouts and freedom of movement in ways that are incompatible with their human right to privacy,” he said. “I expect that this type of functionality will be immediately abolished in order to be compliant with both the spirit and the letter of the new law.”

While acknowledging this welcoming initiative, the experts urged the government to fulfil without any further delay its pledge to fully abolish the male ‘guardianship’ system as promised at the UN Human Rights Council in March 2019.

The UN experts are Joseph Cannataci, the first Special Rapporteur on the right to privacy and the UN Working Group on discrimination against women and girls, comprised of Meskerem Geset Techane, Elizabeth Broderick, Ivana Radačić, Alda Facio and Melissa Upreti.

UN independent experts are appointed by the Geneva-based UN Human Rights Council to examine and report back on a specific human rights theme or a country situation. The positions are honorary, and the experts are not UN staff, nor are they paid for their work. 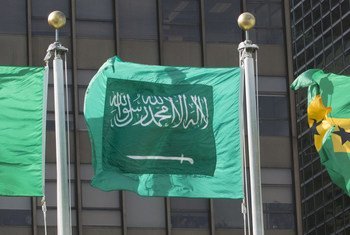 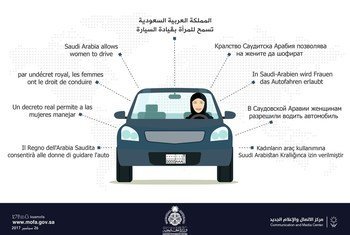 United Nations Secretary-General António Guterres has welcomed the lifting on Sunday of the driving ban for women in Saudi Arabia and expressed his hope that ending the prohibition will generate more new opportunities for women in the Kingdom.