© UNHCR/Hereward Holland
A woman weeps, minutes after being saved by the Sea Watch search and rescue ship, in Libya.
26 July 2019
Migrants and Refugees

"This tragedy has to now lead to action."

Several of the senior officials have called for a return to sea rescues in the Mediterranean.

The Libya office of the International Organization for Migrants (IOM), published social media reports on Thursday that some 145 survivors of the shipwreck, mainly Eritreans and Sudanese, were returned to the Libyan shore. The survivors reported that some 250 were on the boat before it capsized, after engine failure.

In a Tweet, Mr. Guterres wrote that he was “horrified” by the news, and called for “safe, legal routes for migrants and refugees”. His comments were echoed by the head of the UN refugee agency (UNHCR), Filippo Grandi, and the UN children’s fund (UNICEF) chief, Henrietta Fore, both of whom also called for end to the arbitrary detention of refugees and migrants in Libya.

Without urgent action we will continue to see children lose their lives making these journeys Henrietta Fore, Executive Director, UNICEF

A spokesperson for UNHCR, said in a press briefing on Friday that the large loss of life underscores the “terrible urgency” of the agency’s repeated pleas to States to restore sea rescues and “help with alleviating the suffering of the thousands of refugees and migrants caught in the conflict in Libya.

The UNHCR spokesperson reiterated the agency’s request for additional help, such as further resettlement places, and other safe pathways out of Libya for vulnerable people; as well as increased measures to arrest and prosecute people traffickers.

The wreck occurred three days after a conference in Paris on the situation in Libya and the Mediterranean, attended by the heads of the UN’s refugee and migration agencies, during which they called for sea rescues not to be criminalized, and for those rescued not to be sent back to Libya.

♦ Receive daily updates directly in your inbox - Subscribe here to a topic.
♦ Download the UN News app for your iOS or Android devices.
libya|UNHCR|IOM|UNICEF 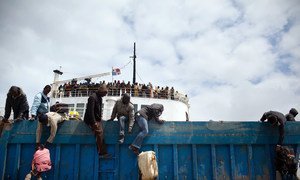 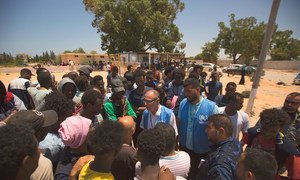