As “one of the most iconic and inspirational leaders of our time”, the UN chief said: “Nelson Mandela exemplified courage, compassion and commitment to freedom, peace and social justice”.

“He lived by these principles and was prepared to sacrifice his liberty and even his life for them”, Mr. Guterres spelled out.

In November 2009, the UN declared 18 July, Nelson Mandela International Day as a global call to action under the premise that everyone has the power to make an impact on the planet.

With hate speech casting a growing shadow around the world, “Nelson Mandela’s calls for social cohesion and an end to racism are particularly relevant today”, said the UN chief.

“As we work collectively for peace, stability, sustainable development and human rights for all, we would be well served to recall the example set by Nelson Mandela,” he asserted. “Our best tribute is found in actions”.

Lauding the late South African President’s qualities and service to humanity, the UN in New York hosted the Nelson Mandela Peace Summit during last year’s General Assembly week, where some 100 Heads of State and Government, Ministers and Member States, adopted a political declaration to redouble efforts to build a just, peaceful, prosperous, inclusive and fair world.

The declaration, which recognized the period from 2019 to 2028 as the Nelson Mandela Decade of Peace, saluted Mr. Mandela – or “Madiba” as he’s known affectionately by South Africans - for his humility and compassion, while also acknowledging his contribution to the struggle for democracy and the promotion of a culture of world peace.

"Our children are our greatest treasure. They are our future. Those who abuse them tear at the fabric of our society and weaken our nation." - Nelson Mandela#MandelaDay#LeadingLikeMandela@NelsonMandela @OPSC_SA@G_MachelTrust@UNDPSouthAfrica pic.twitter.com/vKiS8jNyJI

Saying that “every one of us can step up and act for enduring change”, Mr. Guterres maintained that Nelson Mandela’s message to the world is clear and “we all have the duty to do so”.

“On this day of reflection on Nelson Mandela’s life and work, let us embrace his legacy and aspire to emulate his example”, concluded the Secretary-General.

Honouring ‘Madiba’ at Headquarters in New York and beyond

In 2015, as General Assembly President María Fernanda Espinosa noted in a special celebration event on Thursday, the UN adopted Standard Minimum Rules for the Treatment of Prisoners, known as the ‘Nelson Mandela Rules’ to promote humane prison conditions, raise awareness that prisoners are part of society and to value the work of prison staff.

“In keeping with a life spent "walking the talk", Mandela Day is marked not by grand words or gestures, but by action taken by individuals in their communities”, she said, noting that she and some of her team would be among the UN volunteers who would be helping to prepare and serve meals at a Community centre in the low-income neighbourhood of Brownsville, Brooklyn, later in the day. Mr. Mandela himself also paid a visit there in 1990.

She recognized that for so many people in this city, “the UN can feel like something distant”, adding that she was “delighted” to do something tangible “to serve people in Brooklyn, as we strive to serve the whole of humanity”.

Ms. Espinosa met President Mandela during the 2002 Climate Summit in Johannesburg, where she “was struck by how his profound respect for human dignity was evident in every interaction with those around him”.

“We can channel his spirit and honour him by carrying forward his legacy”, the Assembly president said, including by increasing “efforts to combat racism and hate speech” and addressing “the lasting impacts of colonialism and slavery, which “demand that we do more to build a culture of peace”.

From the UN’s High-Level Week in September to its 75th anniversary in September 2020 and key events in between, she underscored the need “to demonstrate greater trust, cooperation, and shared responsibilities” to address the world’s multiple crises, including climate, conflict, and poverty as “there can be no better tribute to Mandela than being each other’s keepers and stewards of the planet”.

“As we contend with challenges old and new, let Madiba’s legacy inspire us to act in a way that matches the ambition of our resolutions”, she concluded.

It was 'the greatest thing' to have Mandela among us, says Brownsville resident

On site in Brooklyn today, retired educator and community activist Paul Chandler is something of a living legend in Brownsville. Lucky to have met Nelson Mandela in 1990 during his visit, he lit up recalling the occasion, saying that "it was the greatest thing to have him in my community.”

“He gave me inspiration”, affirmed Mr. Chandler. “If he could do it, I could also be out on the street, could be part of changing our community.” 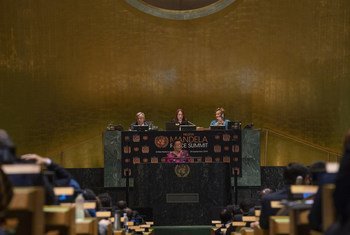 At UN, countries pledge to be guided by Mandela’s legacy in working for a better world

The United Nations General Assembly on Monday honoured Nelson Mandela with a pledge to build a just, peaceful and prosperous world and to revive the values for which the former South African President and anti-apartheid campaigner stood. 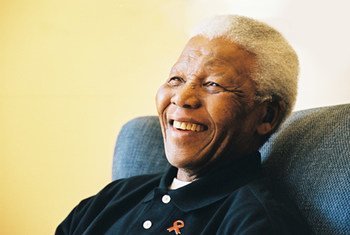