Determined children learning in classes without roofs, resilient women farming without tools or much land, and grateful people who survived a cyclone that destroyed their livelihoods; on his final day in Mozambique, UN chief António Guterres witnessed first-hand the inner strength and resilience of the storm-ravaged country's people.

Mr. Guterres is in Mozambique to take stock of the recovery efforts in areas impacted by devastating cyclones Idai and Kenneth, which hit just a few weeks apart in March and April 2019.

Capping an emotional two-day visit, during which the Secretary-General commented repeatedly on the resilience of the Mozambican people, a remarkable thing happened early on Friday during his visit to areas affected by Cyclone Idai.

‘You’re going to have a beautiful school’

When Mr. Guterres asked a class of students: “How many of you have had your homes destroyed by the cyclone?”, almost every little hand was raised in the crowded classroom, which was baking under the hot sun because much of the roof ripped off by winds of 195-kilometer per hours when the cyclone hit.

The school, Escola 25 de Junho, is in Mozambique’s second-largest city, Beira, where 90 per cent of all infrastructure was damaged during Idai on March 14 and 15. Every day now, as people struggle to recover and rebuild, the school hosts close to five thousand children, divided into three shifts, in classes of up to 90 students.

It breaks my heart to see children get an education in a classroom with no roof. Months after Cyclones Idai and Kenneth, the situation in Mozambique is still extremely difficult. The international community must continue to provide tangible support &amp; show strong solidarity. pic.twitter.com/GVEsHdLcXb

The UN Secretary-General took a tour of the school, led by its Principal Frederico Francisco. Going from class to class, the Principal introduced Mr. Guterres and remind the children of “the very special visit” that they had talked about, adding that the UN chief “had come from very far because he heard about what happened here.”

When Mr. Francisco led the UN chief to a makeshift class being held in the middle of a patio, Mr Guterres promised that “You’re going to have a beautiful school.”

In another class, he urged the children to “keep studying, learn your subjects well, so that you can become engineers and doctors.”

To another class, the UN chief explained what the UN stands for. “It’s a place where all the countries get together to try to solve the problems of the world. Sometimes they are able to do so, sometimes they are not”, he said.

Among the five pavilions in the school, only one structure had not been damaged by the cyclone and remained solid. It opened in February this year, just before the disaster. It was built according to UN-Habitat’s technical guidance by a programme of the Government of Mozambique as an example of how buildings could be made resistant to extreme climate events.

“That’s a great example of a culture of resilience, of how things can resist when they are built the right way”, Mr. Guterres observed. Across Mozambique, the same UN-Habitat good practices has influenced the construction of three thousand resilient classrooms, funded by several development partners, such as UNICEF, World Bank, and ECHO, among others.

It was inside this class built with UN-Habitat’s technical guidance that the Secretary-General met with a group of persons with disabilities and one person with albinism, as well as some of the most vulnerable people affected by the disaster.

Forty-four-year-old Orlando Machambissa told the UN chief that “people with disabilities suffered twice more” than the rest of the population.  Mr. Machambissa has albinism and is losing his eyesight.

He said that the night the cyclone hit was “a night that is impossible to forget”, adding that some people “had the courage to get their things that were being blown away by the wind, but the visually impaired could not see where the things were going.”

Mr. Guterres also met 37-year-old Antónia Piripiri, a district coordinator for the Forum of Mozambican Associations of Persons with Disabilities (FAMOD). Ms. Piripiri has a hearing disability and, through an interpreter, explained that, in a country where most people get their news by the radio, people like her “had a lack of information” during the emergency.

UN Photo/Eskinder Debebe
In Beira, Mozambique, Secretary-General António Guterres (centre) visits the “25 de Junho” School that is hosting around 5,000 children ranging in ages from five to 14.

“It happened suddenly, without any warning, and they went out and saw all the houses falling”, she said.

Mr. Guterres said, “the United Nations has the obligation to do everything to help, especially people who are more vulnerable, who suffered the most with this tragedy.”

A half-hour drive from Beira, Mr.  Guterres visited the Mandruzi Camp, where 480 families have been temporarily resettled. They have been given plots of land by the government, but still live in tents provided by the UN refugee agency, UNHCR, the International Organization for Migration (IOM), and other humanitarian partners.

At the Mandruzi Camp, the Secretary-General was warmly welcomed at a UNICEF-supported school with chants of Titio Guterres, or “Uncle Guterres”. The UN chief shared a light moment with a class of first graders when he tested them on how well they knew their numbers – up to four.

Mr. Guterres then took a quick tour of the camp, meeting several families. He talked with residents, including two women and a young boy, about life in the camp. A few times, he asked if they liked their new place. “Yes,” he heard every time, because they felt safer.

At a media event later in the day, the Secretary-General spoke about the challenges of resettlement in Mozambique. All temporary shelter provisions have ended in the country, and the 46 thousand people still living in camps are not going back to their old neighborhoods and villages.

“I am sure that investment will be progressively made, and we will support this investment in education and health and other things necessary for the well-being of these populations”, he told journalists.

The Secretary-General lauded the resilience and determination of the Mozambican people.  “I was already impressed with what I saw. What I saw was the great courage and determination of those people. I saw people already sowing and planting. They still don’t have a house, but they are already sowing, they are already planting. They already want to build their future.”

‘We need the tools to go back to making a living’

Before leaving Beira, an exception was made at a safe space for children and women, where traditionally men are not allowed, and the residents welcomed the Secretary-General. Outside the tent donated by the UN Population Fund (UNFPA), he placed his chair at the door, respecting the sanctity of the space.

Mr. Guterres heard some concerns from the women, about how far away the school was for the older children; that they still lacked materials to start building houses; how difficult it is to raise children as a single mother.

But mostly he heard how they don’t want to be dependent on help.

“We just need the tools necessary to go back and make a living”, one woman said, adding that some of them were seamstresses or farmers, and that others would like to learn how to read and write, or how to make baskets and pottery that they could sell.

“We want to feel like we are making a living with our own hands.”

After leaving the camp, Mr. Guterres met with the humanitarian leadership team in Mozambique, and received an update on the emergency. He also visited the UN World Food Programme (WFP) warehouse, were he met more than 100 humanitarian workers involved in the response.

The UN chief made special note of the Mozambican workers, saying he knew that some of them “had been victims, but have kept on working to help others.”

The Secretary-General also visited a system of channels, dams and retention basins that were built with the support of a group of partners, including the World Bank. This investment prevented greater damage during the cyclone. This infrastructure is now being expanded.

At the city Mayor’s office, Mr. Guterres went up to the roof to get a 360-degree view of the damage.

He saw a tower in the corner of the building and decided to climb it. One old iron ladder after another until he was perched atop of the building, on a small round platform, looking North, where cyclone Kenneth hit six weeks after Idai, affecting 400 thousand people, and looking west, to the areas of Buzi and Dondo, where most of the 648 killed during the disaster lost their lives.

The UN Secretary-General leaves Mozambique with the resilience, determination, and independence of the people forever imprinted on heart. 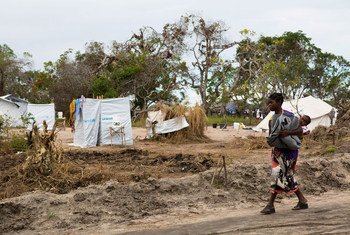