Monday, 8 July, at 10:00: #ICC Judges to announce whether they find #Ntaganda innocent or guilty of the war crimes and crimes against humanity.

The judgement was made during a public hearing in The Hague, Netherlands, after the Chamber reviewed all the evidence submitted during the trial, including documents and eye witness testimony.

Along with Mr. Ntaganda, the Union of Congolese Patriots (UPC) and its military wing, the Patriotic Force for the Liberation of Congo (FPLC), were found to be “at all times involved in at least one non-international armed conflict” in the north-eastern DRC district.

While the evidence did not sustain a guilty verdict in all the instances outlined by the prosecutor, it did demonstrate in relation to each count, that at least part of each charge was proven “beyond any reasonable doubt”.

Prosecutors considered him crucial in planning and running UCP and FPLC operations, and in the ruling, Judge Robert Fremr described the warlord as a "key leader" who gave orders to "target and kill civilians".

According to the judge, 102 witnesses gave testimony, including a woman whose throat was slit by members of his forces. The judges also ruled that Mr. Ntaganda had shot dead an elderly Catholic priest.

In one attack, fighters killed 49 captured people in a banana field behind a village using "sticks and batons as well as knives and machetes".

Judge Fremr elaborated, saying that "men, women and children and babies were found in the field".

"Some bodies were found naked, some had hands tied up, some had their heads crushed", said Judge Fremr.  "Several bodies were disembowelled or otherwise mutilated".

The Chamber found the commander directly liable for perpetrating acts of murder, as a crime against humanity and a war crime as well as bearing indirect responsibility in other instances.

A total of 2,129 victims were represented through legal counsel. The Trial Chamber issued 347 written decisions and 257 oral decisions during the trial, receiving some 1,400 pages of written closing submissions, and entering 1,791 separate pieces of evidence.

According to news reports, Mr. Ntaganda, who was first indicted in 2006, became a symbol of impunity in Africa, even serving as a general in the Congolese Army before turning himself in 2013, at the UN embassy in neighbouring Rwanda, as his power base crumbled.

To determine Mr. Ntaganda's sentence, the Chamber will schedule a separate hearing, for which it will receive and review evidence, during which time the former warlord will continue to be held in detention.

Known by the nickname “Terminator”, Mr. Ntaganda is the fourth person to be convicted by the ICC since its inception in 2002, and the first to be convicted of sexual slavery. The 46-year-old now has 30 days to appeal the convictions. 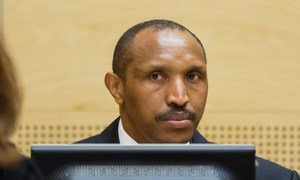 As the International Criminal Court (ICC) trial of Congolese rebel leader Bosco Ntaganda opened today, the UN Special Representative on Sexual Violence in Conflict said that it served as a powerful reminder to military leaders accused of similar acts that justice will ultimately prevail.