According to UNHCR’s Projected Global Resettlement Needs 2020 report, those with the greatest needs include nationals from Syria (40 per cent), South Sudan (14 per cent) and the Democratic Republic of the Congo (11 per cent).

“Given the record numbers of people needing safety from war, conflict and persecution and the lack of political solutions to these situations, we urgently need countries to come forward and resettle more refugees,” said UN High Commissioner for Refugees Filippo Grandi.

25 million refugees are generously hosted by countries around the world.

These are the countries that have stepped up for those who have lost everything. pic.twitter.com/3klf3Fqaqc

Globally, resettlement needs in 2020 are set to rise by one per cent compared with this year, driven by increased displacement in Africa and the Americas, which account for six and 22 per cent respectively.

At 450,000 people, the East and Horn of Africa region has the highest resettlement needs, reflecting ongoing insecurity in South Sudan despite a 2018 peace agreement, and protracted refugee situations in DRC, Central Africa, Eritrea, Somalia and Sudan, according to UNHCR.

There has to be more equitable sharing of refugees: Grandi

“With the overwhelming majority, 84 per cent, of the world’s refugees hosted in developing regions facing their own development and economic challenges and whose own populations may live below the poverty line, there simply has to be a more equitable sharing of responsibility for global crises”, Mr. Grandi told Member States attending consultations in Geneva on resettlement for refugees.

Resettlement involves the relocation of refugees from a country of asylum to a country that has agreed to admit them and grant them permanent settlement.

It is regarded by UNHCR as a life-saving tool to ensure the protection of those most at risk or with specific needs that cannot be addressed in the country where they have sought protection.

In a bid to provide more vulnerable refugees with a new home in a third country – and amid significantly fewer resettlement opportunities globally in the last two years - UNHCR and partners on Friday unveiled an initiative in support of resettlement and other legal alternatives to enter countries, such as family, work and study routes.

By the end of 2028, the objective of the strategy is to expand so-called “third country solutions” for three million refugees, with one million resettling in 50 countries and two million benefiting from alternative pathways.

A Global Refugee Forum is to be held in December in Geneva, which UNHCR believes is a “critical opportunity to galvanize support through commitments and pledges” from States and other relevant stakeholders.

“History has shown that with a strong sense of purpose, States can come together to collectively respond to refugee crises, and help millions to reach safety, find homes and build futures in new communities,” Mr. Grandi insisted.

In a related development, UNHCR has added its support to a UN-appointed independent rights expert’s call for many more States to increase protection for the LGBTI community and to be more aware of their “unique vulnerability”.

Today, only 37 States grant asylum to individuals on the basis of persecution based on sexual orientation or gender identity, according to UNHCR’s Assistant High Commissioner for Protection, Volker Türk, and the UN Independent Expert Victor Madrigal-Borloz.

“For many LGBTI people, the trauma and persecution start well before their actual flight to safety,” Mr. Madrigal Borloz said. “Persecution often manifests through laws that criminalise sexual orientation, gender identity or expression or that are discriminatory.”

LGBTI people are also exposed to disproportionate levels of arbitrary detention, police abuse, violence and extrajudicial killings by both State and non-State actors, the Independent Expert said, “as well as abuse in medical settings, including forced sterilisations and so-called ‘conversion therapies’”.

Echoing that message, Mr. Turk added that many LGBTI refugees continue to face prejudice and violence in countries of transit and host countries.

Türk said that, even in locations where LGBTI refugees are more accepted and services are accessible, many choose to conceal their sexual orientation and gender identity for fear they might be targeted or marginalised, particularly in densely populated areas.

It is therefore crucial to create safe spaces and services that are designed in consultation with LGBTI people and their organisations.

♦ Receive daily updates directly in your inbox - Subscribe here to a topic.
♦ Download the UN News app for your iOS or Android devices.
resettlement|LGBT 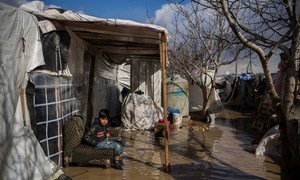 Despite record numbers of people forcibly displaced across borders, with 1.2 million in need of a new permanent place to call home last year, the UN refugee agency (UNHCR) released new data on Tuesday showing that only 55,700 of them – 4.7 per cent – were able to be resettled in 2018.