This is especially true at time when both countries continue their diplomatic war of words over recent attacks around the crucial oil shipping lanes of the Gulf, said Under-Secretary-General Rosemary DiCarlo, describing events as “a reminder that we are at a critical juncture.”

The Joint Comprehensive Plan of Action (JCPOA) – reached by Iran, China, France, Germany, Russia, the United Kingdom, the US and the European Union – sets out rigorous mechanisms for monitoring restrictions placed on Iran’s nuclear programme, while paving the way for the lifting of UN sanctions against Iran.

Ms. DiCarlo described it as the result of “12 years of intense diplomatic efforts and technical negotiations”, regarded by UN Secretary-General António Guterres as a major success of “multilateralism, nuclear non-proliferation, dialogue and diplomacy.”

With the International Atomic Energy Agency (IAEA) stating in its latest report that Iran is abiding by its commitments, she said the UN chief was concerned at the US decision in May, not to extend waivers so that Iran can continuing trading oil, and other waivers directly relating to the JCPOA. The US withdrew from the deal just over a year ago, but some oil buyers were allowed to keep taking limited volumes.

US actions “may impede the ability of Iran and other Member States to implement certain of its provisions”, said the Political Affairs chief, adding that Mr. Guterres also regretted Iran’s announcement this May, that it would not commit to the agreed limits on enriched uranium, unless other JCPOA signatories agreed to work round the increased US sanctions, within 60 days.

Iran raised the stakes higher by announcing last week it would pass it’s agreed limits on enriched uranium by 27 June: “Such actions are not in the interests of the participants of the Plan and may not help preserve it’, she said. “The Secretary-General encourages Iran to continue implementing all its nuclear-related commitments despite the considerable challenges it faces.”

Ms DiCarlo said the UN chief welcomed initiatives from other countries – including all the Security Council Permanent Members to save the deal, “which should be given full effect as a matter or priority.”

“It is essential that the Plan continues to work for all its participants, including by delivering tangible economic benefits to the Iranian people”, she added.

Turning to provisions in the JCPOA, Ms. DiCarlo said there were “divergent views” from Member States over whether Iran had breached the agreement in various test firing and test flights, since December.

With reference to ballistic missiles deployed by Houthi rebels in Yemen, against Saudi Arabia, she said that some components analyzed by the UN showed it was likely they had been supplied from outside Yemen, after 2015. Regarding other military hardware and explosives, she said the Secretariat was “confident” that some arms analyzed from the battlefield, showed they were of “Iranian manufacture” but it was impossible to tell if they were transferred after Iran had committed to the deal.

Iran, US, EU weigh in

Iran’s Ambassador to the UN, Majid Takht Ravanchi told the Council that “the US withdrawal from the JCPOA and re-imposition of sanctions” had rendered the deal “almost fully ineffective...Iran alone cannot, shall not and will not take all of the burdens anymore, to preserve the JCPOA”, he declared.

With the European powers working hard to save the deal and the Iranian 60-day deadline to them of 8 July looming, The UN Ambassador for the European Union, Joao Vale de Almeida, warned that there was “no credible, peaceful alternative”.

Jonathan Cohen, acting US Ambassador, said the Iran’s “defiance of the Security Council and its reckless behaviour threatening peace and security globally must not be downplayed in the name of preserving a deal that doesn’t fully cut off Iran’s path to a nuclear weapon.”

♦ Receive daily updates directly in your inbox - Subscribe here to a topic.
♦ Download the UN News app for your iOS or Android devices.
iran|security council|JCPOA 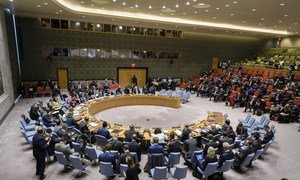 While there is “staunch support” among Member States for the 2016 Iran nuclear deal, known formally as the Joint Comprehensive Plan of Action, or JCPOA, that is tempered by concerns over some of its other activities, which Iran “should carefully consider and address” according to the latest report  on the deal from the UN Secretary-General.