UN Photo/Jean-Marc Ferré
The UN Secretary-General António Guterres speaks during the 108th Session of the International Labour Conference on 21 June 2019.

In his speech to delegates in the Swiss city, Mr. Guterres congratulated Member States for “building upon a legacy of achievement, guided by that age-old vision of social justice through social dialogue and international cooperation”.

The Convention passed with 439 votes in favour, with seven against and 30 abstentions, after a ballot involving representatives of governments, employers and workers, in line with ILO’s tripartite structure.

History is made! The @ILO has just adopted a new Convention on Violence and Harassment in the World of Work. Here's what you need to know. #ilo100 pic.twitter.com/ekPD8Nhben

It is the first new Convention – a legally binding international instrument - agreed by the International Labour Conference since 2011, when the Domestic Workers Convention, was adopted.

According to the new labour standard, violence and harassment at work “constitute a human rights violation or abuse”.

Defined as behaviour that is likely to lead to “physical, psychological, sexual or economic harm”, violence and harassment are also regarded as “a threat to equal opportunities” which are “unacceptable and incompatible with decent work”.

In signing the Convention, Member States have a responsibility to promote a “general environment of zero tolerance”, while also protecting trainees, interns, volunteers, jobseekers and employees “irrespective of their contractual status”.

This includes some 2.5 billion people in the informal work sector, whose collective bargaining power should be utilized to promote workers’ rights, ILO said this week.

For ILO, the Convention reflects the organization’s belief that labour is not a commodity and that people’s wellbeing – and peace - depends on respect.

“Without respect, there is no dignity at work, and, without dignity, there is no social justice,” said Manuela Tomei, Director of the ILO’s Workquality Department. “We now have an agreed definition of violence and harassment; we know what needs to be done to prevent and address it, and by whom. We hope these new standards will lead us into the future of work we want to see.”

Protections must become a reality: Ryder

ILO Director-General Guy Ryder, meanwhile, highlighted that the “next step is to put these protections into practice, so that we create a better, safer, decent, working environment for women and men”.

In his speech at the ILO Conference, Mr. Guterres also welcomed its Centenary Declaration, which he said marked “an historic opportunity to open a door to a brighter future” for people around the world.

“The Centenary Declaration is much more than a statement of wishes or intent,” he added. “It proposes a shift in the paradigm of how we look at development. The wellbeing of people must be at the centre of economic and social policies”.

Mission statements like these were crucial, the UN chief insisted, warning that globalization and climate change had left those on the margins of society “paying the highest price”.

He added: “More than ever, multilateralism is under fire... And everywhere, we see deficits of trust and a surplus of fear-mongering. You could call it an age of disillusion. The most effective way to rebuild trust is by listening and by delivering. The International Labour Organisation plays a central role for a simple reason: Your agenda is at the centre of people’s concerns.”

Describing the ILO as being “ahead of its time” for its tripartite governing structure, Mr. Guterres insisted that new mechanisms for cooperation and governance had to be reimagined in future, to cope with current challenges.

And while these changes offered opportunities, they could also generate “fear and anxiety”, he warned.

“As we look ahead, we know new technologies – especially artificial intelligence – will inevitably lead to massive destruction of jobs and a massive creation of new jobs,” he said, calling for a “massive” investment in education to ensure lifelong learning in a world where the concept of “work” itself is evolving.

Listen to an interview with Professor Catharine MacKinnon, who established the legal grounds for defining sexual harassment as sex discrimination.

More than 1 in 5 worldwide suffering from violence at work: ILO 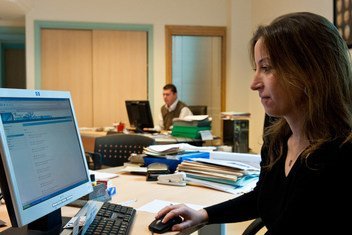 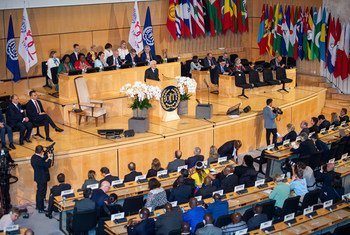