Tiny balls moved along a series of automated Lego robots, as young students from New York explained to United Nations staff the inner-workings of simple motors and engineering.

In the room next door, UN communications technology staff were briefing the other half of the student group on some of the more advanced developments that are leading the way in the Fourth Industrial Revolution - recognition and other emerging technologies.

On the table was a supply chain of robots, some with red claws made of tiny triangles lifting the balls to a platform, others sliding up a conveyer belt. Occasionally, a white or orange ball the size of a quarter-dollar would bounce off and land at the students’ feet.

Camryn is one of the 18 students from Queens, New York, who visited the UN to showcase the robots on Wednesday, as part of a demonstration into how essential all technology is, to reaching the ambitious 2030 Sustainable Development Goals (SDGs).

She pointed out the simple motor and bridge and spoke about how much she enjoyed the engineering experience, although she’s not ready yet to commit to this field in the future.

Heading into orbit, to save the planet

“I don’t know. I’m only 11”, she said, proudly pointing out a robot that moves without wheels on giant spindles – a creation built around this year’s theme, “Into Orbit”. This extra-terrestrial leap of imagination makes students picture an uninhabitable planet that needs time to heal itself, sending all its inhabitants into space.

Camryn is part of an after-school program, volunteering three hours per day at least three times per week, to build and then showcase the creations in First Lego League competitions, following a two-month research period. The program teaches students about physics, maths and science, as well as improving their communications skills and abilities to work in teams.

“I love the programme. It also teaches independence and time management,” said Camryn’s mother, who is one of numerous chaperones for the UN visit and helps to support the after-school program.

There are ten girls on the team, one as young as nine, with students attending fourth to eighth grade.

They need to believe in themselves. Prove the critics wrong. You can do all this at home - Science teacher, Francis ‘Mr. B’ Belizario

He said reaching out to girls is important and while students in fourth and fifth grade still see equality between the genders, that changes when you go up in age.

“There’s no excuses now for the inequality. It used to be that things were manual. It’s all machines now. Programming involves brains”, Mr. B said. “They need to believe in themselves. Prove the critics wrong. You can do all this at home.”

While the “Jaguars” where showcasing their robots, the “Wolves” were hearing from two staff at the UN Emerging Technologies section of the Office of Information and Communication Technology (OICT).

Referencing the five robots or modules that make up the giant obstacle course for balls, he talked about new technology that uses up to six satellites in orbit to track the temperature, pressure and humidity of goods such as vaccines that, like the balls, move through a supply chain.

“Imagine that one of those balls is chocolate. You don’t want it to be too hot because it would melt,” he explained, pointing to how the little box on the table works in the real world.

“Is that a breadboard that hold the sensors?”, asked one of the students, sparking a conversation that would last until lunchtime.

The students would later get a tour of the United Nations and be back in school across the river in Queens, for the afternoon bell. For most, it was their first time visiting Headquarters. When asked what the UN does, one student replied that “diplomats from around the world meet here and discuss things.”

Those things include how people will survive in the future rolled into 17 Sustainable Development Goals, which include gender equality and sustainable development.

“Robots are usually not discussed here,” our UN News reporter told the students.

“They should be. It’s how we will survive,” was the reply.

♦ Receive daily updates directly in your inbox - Subscribe here to a topic.
♦ Download the UN News app for your iOS or Android devices.
robot|New technologies|information and communication technologies|artificial intelligence 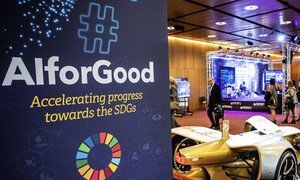 Artificial intelligence, or AI, is at the forefront of fighting hunger, mitigating the climate crisis and facilitating “the transition to smart sustainable cities", said the chief of the UN agency which specializes in information and communication technologies, Houlin Zhao, kicking off the third AI for Good Global Summit in Geneva. 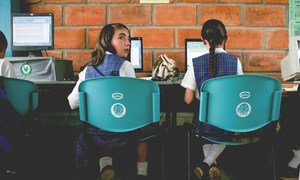