Technological innovation is continuing to transform the world, with the potential to propel us all towards reaching the 2030 Sustainable Development Goals (SDGs) said the UN Secretary-General António Guterres on Friday, at the Saint Petersburg International Economic Forum in Russia.

But as much as it is a “vector of hope, it is also a source of fear”, that will cause massive disruption to labour markets as they adapt with an “enormous amount of jobs both created and destroyed by artificial intelligence”, added the UN chief.

We are threatened by global warming but also by global political warming. Both are dangerous but both are avoidable.#SPIEF2019 https://t.co/8l8Osf9JM4 pic.twitter.com/FwcttyGkFE

Sharing the stage with Russian President Vladimir Putin, and Chinese President Xi Jingping, along with other national leaders, Mr. Guterres highlighted the publication this coming Monday of his High-Level Panel on Digital Cooperation, co-chaired by China’s Jack Ma, founder of the Ali Baba conglomerate, and Melinda Gates of the Gates Foundation; a leading former Microsoft executive, before she and her husband Bill devoted their energies fulltime to running the world’s largest philanthropic organization.

Their report will issue recommendations on the way forward for the so-called Fourth Industrial Revolution, with Panel members having spent months listening to input from industry, the private sector, governments, academia, civil society and inter-governmental organizations across the world. It was set up almost a year ago.

“We need a massive investment in education – but also a different kind of education” said Mr. Guterres in Saint Petersburg, “not just learning things, but learning how to learn, and learning across the lifetime. And we also need a new generation of safety nets, for effective social protection for the people negatively impacted.”

He noted other major risks, such as the “crippling impact of cyber-attacks, as well as the threats to privacy and violations of human rights. And the internet is simultaneously a remarkable vehicle for connecting people and a weapon for dividing them through hate speech”, he added, noting that still only half the world was even online.

“Our shared challenge is to reduce digital inequality, to build digital capacity and ensure that new technologies are on our side and are a force for good”.

Mr. Guterres told world leaders that “our shared duty…is to show that we care and that international cooperation can deliver”, noting this was the driver behind his UN reform agenda, a new disarmament agenda, strengthened counter-terrorism efforts and the forthcoming plan of action against hate speech.

After meeting President Putin on Friday, the UN chief said the event in the historic Russian city was an “important opportunity” to address issues vital to the Organization “and in particular, in this Forum’s context, the Sustainable Development Goals and the possibility of a fair globalization.”

I would also like to underline the very important role that Russia plays in support of multilateralism and the UN - support that is even more important, in (the) difficult times we are living in”, he told reporters.

“As a founding member, permanent member of the Security Council, Russia is an absolutely indispensable actor in the international scene today if we want a more balanced world,” he concluded.

‘Maximize the positive’ from new technologies, for our digital future, Guterres urges 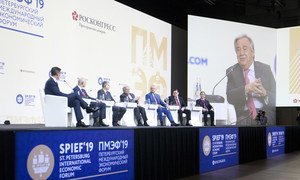 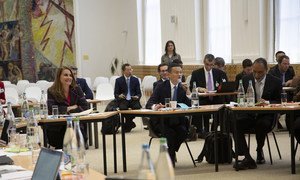