UNICEF/Karel Prinsloo
A woman carries her baby through a resettlement site for people displaced by cyclones outside Beira, Mozambique. (28 May 2019)

According to UNDP, a two-day international pledging conference in the central Mozambique city of Beira – one of the areas worst hit by cyclones Idai and Kenneth – wrapped up with development partners committing financial and technical resources to support recovery interventions as the country deals with the challenging devastation.

The powerful tropical cyclones, which struck Mozambique in quick succession this past March and April respectively, killed hundreds and impacted close to two million.

“The important point coming out of this conference is that this recovery needs to be resilient. Mozambique is prone to climate change disasters, and those cyclones were not a one-time event – unfortunately – and the probability of these disasters reoccurring, many times in the future, is very high,” said Noura Hamladji, UNDP Africa Bureau Reginal Director, representing UNDP at the conference.

Ms. Hamladji added that “there is a need to ‘build back better’, to look at infrastructure, resilience of communities in a different way. This is what this conference is all about, over and above requesting the solidarity of the international community to fund the reconstruction.”

UNDP said the Mozambique Government is establishing a Disaster Management Fund that includes a contribution to its capitalization of 0.1 per cent of the State budget, as well as contributions from partners. Regular external audits will be conducted to ensure transparency and accountability.

Partners, in particular UNDP, pledged to also support capacity development of the Reconstruction Cabinet, a platform established by the Government to ensure transparency and accountability in the achievement of results as well as promoting the development of norms for better reconstruction – building back better, and technical capacity to conduct feasibility studies and procurement, among others.

Sending warm greetings to the Conference on Saturday, United Nations Secretary-General António Guterres  said in a message that he was certain he shared with all a deep sense of distress at the loss of life, the devastation and the suffering caused by the deadly cyclones.

He reiterated his condolences and deep solidarity with the Government and the people of Mozambique, especially the communities most affected by these natural disasters.

“I would also like to express my sincere appreciation to all those who have contributed – and continue to do so – to alleviate the suffering of the people who have been deprived of their goods, houses, infrastructure and livelihoods,” said Mr. Guterres, noting that the UN and its humanitarian partners had been on the ground since the start of the crisis.

The world body’s support to the Government’s efforts included contributing to the coordination of international support; distributing food, drinking water and medicine; and providing shelter to those displaced.

But Mr. Guterres stressed that while the UN Central Emergency Response Fund (CERF) allocated $24 million to Mozambique, it was necessary to recognize that to face the scale of the disaster, large additional resources are needed.

“The means at our disposal are not at all enough. We face enormous challenges: people’s basic needs remain unmet; the risk of disease outbreaks is evident; and the negative impact on food security due to the loss of crops will be very significant,” he said in his message.

He also noted that in order to strengthen the response to the tragedy, the United Nations launched an emergency humanitarian appeal of $282 million, which remained deeply underfunded.

Against this background, Mr. Guterres reiterated his appeal to the generosity of the international community, saying “this is the moment to translate into concrete gestures our solidarity with a country affected by one of the worst weather-related catastrophes in African history – and which also warns us about the urgency of tackling climate change.” 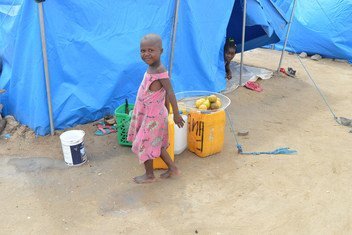