UN Photo/Mark Garten
The UN Secretary-General António Guterres overflies the low-lying coastline of Tuvalu in the Pacific Ocean. (17 May 2019)

“We must stop Tuvalu from sinking and the world from sinking with Tuvalu”, Secretary-General António Guterres said in a tweet posted during his on-going trip to the South Pacific.

Pointing out that Tuvalu is “on the extreme frontlines of the global climate emergency”, he noted that “rising seas threaten to drown this island nation – a sign of what’s in store for us all”.

The @UN chief @antonioguterresmet families in Tuvalu Friday "Whose homes &amp; way of life are at risk because of relentless rising seas"#ClimateAction is essential."We must save Tuvalu - and save the world". pic.twitter.com/TRuzaryep2

At a joint press conference with Tuvalu’s Prime Minister, Enele Sosene Sopoaga, the UN chief told journalists: “You are on the frontline of the war on climate change because climate change is striking in Tuvalu in a more dramatic way than anywhere else in the world”.

He professed his “enormous admiration” that the island nation has “decided to resist” and is implementing “a programme of adaptation and resilience that is something that the whole world should admire and support”.

“But” stressed Mr. Guterres “it’s necessary that governments that are still causing the problems that affect Tuvalu, understand that they need to change”.

He made clear they must alter energy and transportation policies,  along with the way they manage their cities and use fossil fuels “so that the impact of climate change on Tuvalu can be stopped”.

“Climate change cannot be stopped in Tuvalu, it has to be stopped in the rest of the world”, the UN chief spelled out, saying that he will host the 2019 Climate Action Summit in New York “to make sure that all countries accept the commitment that we need to be globally carbon neutral by 2050 to limit the increase in temperature to 1.5 degrees”.

At the same time, Mr. Guterres expressed his “deep solidarity” and the UN’s “total support” to the government and to the people of Tuvalu in their determined efforts to preserve their country – “physically, culturally, in the economic and social dimensions, as a rich component of the Pacific and the international community”.

“Nowhere have I seen the heartbreaking impacts of the global climate emergency more starkly than in Tuvalu, where I met families whose homes are threatened by relentless rising seas” he detailed.

“We must take urgent #ClimateAction to save Tuvalu — and save the world”, the Secretary-General tweeted. 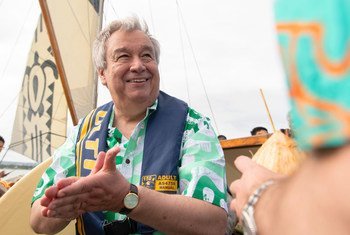 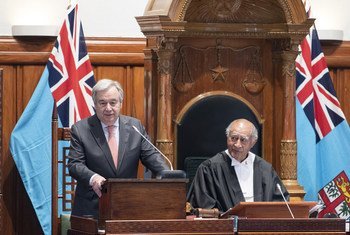