An updated assessment by a United Nations Environment Programme-administered treaty has confirmed that poaching continues to threaten the long-term survival of the African elephant.

Based on the Proportion of Illegally Killed Elephants data, or PIKE, the Convention on International Trade in Endangered Species of Wild Fauna and Flora (CITES) has evaluated the levels of illegal killing through MIKE, the acronym for the Monitoring of Illegal Killing of Elephants programme.

MIKE has calculated that illegal killing is the chief cause of death for elephants.

Evidence reveals that PIKE levels peaked in 2011 when an alarming 10 per cent of African elephants were poached, before steadily declining through 2017. That level has remained relatively unchanged throughout 2018.

Such high PIKE levels are of concern because even in well-established and protected elephant populations, the annual losses to illegal killing and other mortalities are not being compensated by birth rates.

Many African elephant populations are small and fragmented and not well-protected, making them even more vulnerable to poaching. As PIKE levels remain above 0.5 in Africa, the number of elephants in some countries continues to decline.

African elephant populations have fallen from an estimated 12 million a century ago, to some 400,000, according to the most recent estimations contained in the 2016 African Elephant Status Report.

“Illegal killing of African elephants for ivory remains a significant threat to elephant populations in most of the range States”, said CITES Secretary-General Ivonne Higuero. “At the same time, the human population of Africa has grown tenfold, from 125 million to 1,225 million, creating competition for land with elephants”.

While international trade in elephant ivory has been banned by CITES since 1990, opinions differ between countries about whether it should continue or not.

The African elephant and the debate over the ivory trade will be a major item on the agenda of the next triennial CITES Conference of the Parties, originally planned for May in Colombo, Sri Lanka, but now to be rescheduled for a later date.

“We must continue to reduce poaching and illegal trade in ivory and find solutions to ensure the coexistence of elephants with local people”, stressed Mr. Higuero. “The international community should further expand its work with the African range States to find solutions that work both for the elephants and for local communities”. 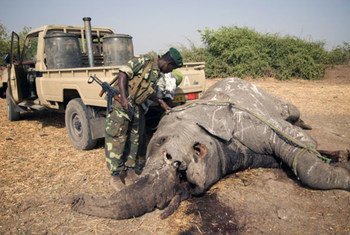 6 March 2013
The future of African elephants remains uncertain as illegal ivory trade continues to grow, according to a United Nations report released today, which calls for enhanced law enforcement to protect the majestic creatures and their environment.