UN Photo/Loey Felipe
File photo of the Prosecutor of the International Criminal Court (ICC), Fatou Bensouda, briefing the UN Security Council on Libya in May 2019.

Fatou Bensouda was delivering her latest report on the progress being made to bring those charged with grave crimes in Libya to account, since the overthrow of the former president in 2011, acknowledging that “the path to justice is often long and the investigations undertaken by her office, “are complex and challenging”.

“Establishing the rule of law is essential to securing ongoing peace and stablity in Libya” she said. “The Council must demonstrate through concrete action its commitment to holding accountable, those responsible for violations of humanitarian law” and the other crimes listed in the Rome Statute.

Establishing the rule of law is essential to securing ongoing peace and stablity in Libya - ICC Prosecutor, Fatou Bensouda

She said ensuring that outstanding warrants issued for the arrest of Saif Al-Islam Gaddafi, Mahmoud Mustafa Busayf Al-Werfalli, and Al-Tuhamy Mohamed Khaled, are executed, with them transferring to the ICC for trial, was “the first and indispensible step”.

“Such a development would send a strong and necessary message to the victims of grave crimes in Libya, that the Council and the international community at large are serious about pursing justice...and committed to taking concrete action towards that end”, she told Council members.

Ms. Bensouda - who appeared before the Council in New York, despite the revocation of her visa by the United States on 4 April over her Office’s investigation of US military personnel in Afghanistan – said that the authorities in Libya remained “under and obligation to arrest and surrender Mr. Gaddafi to the ICC”, although he is appealing against the warrant on the grounds that he has already been tried for the same offences.

“In the present circumstances, given that Mr. Gaddafi is still at large, the pursuit of justice for his alleged crimes remains at an impasse, both in Libya and before the ICC”.

She said that as illustrated by the three cases, “the execution of arrest warrants remains one of the ICC’s greatest challenges”, leaving them wholly reliant on the cooperation of States. The commitment of the Council to urge States to act, was also key, she added.

Improving accountability for crimes against migrants

Turning to the victimization of migrants and refugees attempting to cross through Libya en route to Europe and other destinations, Ms. Bensouda said it was clear that “abuses against migrants start as soon as they cross the border into Libya and continue throughout the journey to the north coast.”

The allegations of cruel, inhuman and degrading treatment implicate many different parties she said, noting that according to a report from UN Mission UNSMIL, and the UN human rights office OHCHR, based on 1,300 first hand accounts, “alleged crimes are being committed by all sides, including State officials, members of militia and armed groups, as well as smugglers and traffickers.”

Her Office, has adopted a two-pronged approach of monitoring abuse and allegations of crimes in both official and unofficial detention centres, to determine whether the ICC has jurisdiction, and also cooperating with States and organizations to coordinate prosecutions and investigations aimed at “closing the impunity gap for Rome Statute and transnational crimes, as well as organized criminal activity”, she said.

The United Nations is “very concerned” over reports of airstrikes which took place on Tuesday, reportedly hitting a migrant detention centre in Tajoura, in Eastern Tripoli, where fighting in recent weeks following the advance of the self-styled Libyan National Army, has led to dozens of civilian deaths.

Two migrants were reportedly injured, and UNSMIL continues to remind all parties of their obligation under International Humanitarian Law to ensure the protection of civilians, including migrants and refugees, said the UN Deputy Spokesperson on Wednesday.

Farhan Haq told journalists in New York that the mission was also deeply concerned about “increased cases of arbitrary arrest and abduction of officials, activists and journalists. It calls on all parties to release immediately anyone arbitrarily arrested and detained and reminds all authorities to operate within the rule of law and ensure that arrests and detention fully comply with due process.” 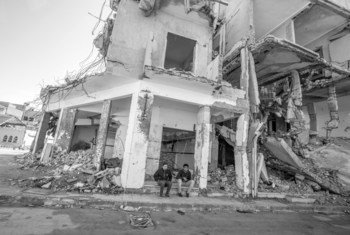 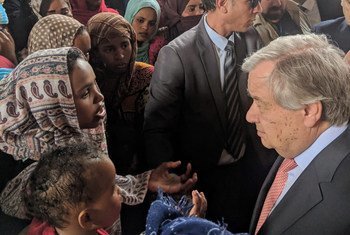