Better training for peacekeepers being deployed to increasingly hostile environments is a “necessary and strategic” investment which can also save lives, the UN Secretary-General told Security Council members on Tuesday.

Addressing an open debate on training and capacity building for UN peacekeeping missions, António Guterres said that “notable progress” had been made in training ‘blue helmets’ and others who serve in some of the most dangerous places on earth, but “much still needs to be done”.

In a statement, the Security Council also underscored the importance of peacekeeping overall, “as one of the most effective tools available…in the promotion and maintenance of international peace and security.”

Mr. Guterres said that beyond preparation, training improves performance. “And as we know, improved performance, reduces fatalities. As such training is a necessary and strategic investment in peacekeeping – and is a shared responsibility between Member States and the Secretariat”.

In the UN’s five most “high-risk” missions, in the Democratic Republic of the Congo (MONUSCO), Darfur (UNAMID), South Sudan (UNMISS) and Mali (MINUSMA), he said an Action Plan to improve security was ongoing, and a comprehensive Training Plan.

“To help address the threat of improvised explosive devices and other dangers, we are working with Troop and Police-Contributing Countries to ensure that units joining our missions meet our operational readiness standards before deployment, and that they have undergone pre-deployment training in accordance with UN standards”, he said. “We are also placing a renewed emphasis on in-mission training to ensure that our peacekeepers benefit from the necessary support in the field.”

Mr. Guterres said more mobile teams were needed from Member States, and to encourage more women leaders, a “talent pipeline specifically for senior women military officers is under development”. He said continued support through government funding was “essential”, noting the “encouraging” downward trend in allegations of sexual exploitation and abuse in peacekeeping missions.

“But we are also minded that we must be vigilant in our prevention efforts and seek accountability whenever the zero-tolerance policy has been violated”.

In its statement, the Security Council welcomed the efforts undertaken overall by the Secretary-General “to mobilize all partners and stakeholders in support of more effective United Nations peacekeeping through his initiative Action for Peacekeeping (A4P), and recognizes the added value that the Declaration of Shared Commitments on Peacekeeping Operations has in relation to training and capacity building.” 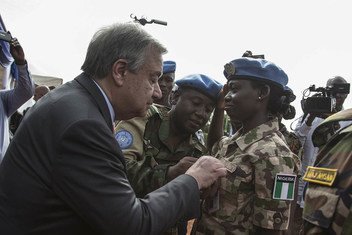 United Nations Peacekeeping missions are working flat out and need to be made “stronger and safer”, Secretary-General António Guterres told a major ministerial pledging conference on Friday, stressing that “critical” gaps must be bridged, so they can deliver better, on behalf of the people they serve.