#Hungary: We are alarmed by reports that #migrants in detention centres have been deliberately deprived of #food in contravention of international laws and standards.Read 👉 https://t.co/qHsKlDF3qi pic.twitter.com/kiTW5sGZRN

OHCHR Spokesperson, Ravina Shamdasani, told reporters in Geneva that under existing laws in Hungary, migrants and asylum seekers who are undocumented, are immediately detained in transit zones during the asylum procedure, or until they can be sent back to their country of origin.

“We are concerned by the absence in these transit zones of meaningful individualised procedures”, she said, “which are required to ensure deprivation of liberty is an exceptional measure, and that all risks prohibiting a person’s return, are taken into account.”

She said once Hungarian authorities begin proceedings to expel “rejected” applicants, they stop being given food. “Pending the enforcement of the expulsion, adults - with the sole exception of pregnant or nursing women - are deliberately deprived of food, which can lead to malnutrition and is both detrimental to their health and inherently inhumane.”

Ms. Shamdasani said that since last August, at least 21 migrants awaiting deportation had reportedly been deprived of food in this way, “some for up to five days”.

“We note that the Hungarian authorities had promised to end this practice following an interim measure by the European Court of Human Rights. However, we regret that, in the absence of a clear change in the legal framework, reports suggest the practice is continuing”, she added.

She said that if migrants were arbitrarily detained in “inadequate conditions” or facing coercion, that would render any returns involuntary.

The OHCHR Spokesperson reminded all States, of their “obligation and heightened duty of care towards migrants who are deprived of their liberty, including through the provision of food.”

“We encourage Hungary to ensure it fulfils its human rights obligations towards those deprived of liberty,” she concluded, “regardless of whether they are in transit zones or any other place where migrants are detained and cannot provide for themselves.” 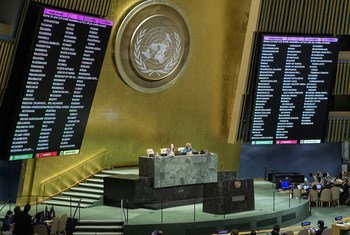 The United Nations General Assembly officially endorsed the Global Compact for Safe, Orderly and Regular Migration on Wednesday, a non-binding agreement adopted in Marrakech on 10 December by 164 Member States, and described by UN chief António Guterres as a “roadmap to prevent suffering and chaos”. 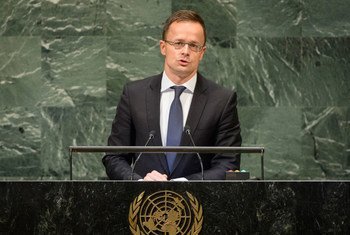 Hungary had proved wrong arguments that migration is impossible to stop by securing its borders with a €1 billion (about $1.16 billion) fence, the country’s Foreign Minister told world leaders at the United Nations General Assembly’s annual debate.