“This modest shift in the mission’s role is necessary to match the reality on the ground,” Jean-Pierre Lacroix, Under-Secretary-General for Peacekeeping Operations said during a briefing to the Security Council on the Secretary-General’s latest report on the work of the UN Interim Security Force, known by the acronym UNISFA.

“The proposed support is particularly pertinent given the difficult internal circumstances in both countries,” noted Mr. Lacroix, adding: “It is important to prevent the dispute over Abyei and the border regions between Sudan and South Sudan from becoming another frozen conflict and preserve the gains achieved by UNISFA.”

Stressing that while the situation generally remains calm – amid efforts by the Ngok Dinka and Misseriya communities to preserve peace through dialogue – Sudan and South Sudan have made no progress on the issue of Abyei.

Further, there have been delays in the Council’s request to reconfigure the mission, he said. The first phase of troop reductions – a repatriation of 260 troops by 15 March – has not taken place, but efforts are under way to start the process on 12 May.

As for the increase in police personnel, while the selection of police officers and the formed police unit has been completed, 130 visas from the Sudanese Government, necessary for their deployment, remain outstanding.

Against this background, Mr. Lacroix said that while UNISFA continues to play a stabilizing role in the Abyei Area and along the border regions, the operation can only provide a conducive environment for the parties, whose own efforts remain essential to progress.

“I am encouraged by the significantly improved relations between the two countries in the past year, as evidenced by Sudan’s role in facilitating the revitalized peace agreement reached by the South Sudanese parties and the resumption of joint oil operations,” he told the Council, urging the two countries to continue this “positive trajectory” and extend their cooperation to move forward on the resolution of their disputes.

UN Photo/Evan Schneider
Parfait Onanga-Anyanga, Special Envoy of the Secretary-General for the Horn of Africa, briefs the Security Council on the situation in the Sudan and South Sudan including the situation in Abyei.

Also briefing the Council, Parfait Onanga-Anyanga, the UN Secretary-General’s Special Envoy for the Horn of Africa, said that both id Sudan and South Sudan “are at a crossroads with critical political processes under way.”

Following the ouster of Sudan’s President on 11 April after months of popular protests, the new authorities may need time to resume bilateral relations on the border, the Two Areas and Abyei.

“We have a de facto status quo situation,” he said. In the absence of a joint administration and progress on Abyei’s final status, UNISFA remains central to preventing and resolving intercommunal conflicts.

In the coming weeks, he will encourage the respective capitals, Khartoum and Juba, to take a fresh look at the Abyei file, with a focus on implementing temporary arrangements for the Area’s administration.

Noting that Sudan’s political transition could allow for redefining relations between the “centre” and its “peripheries” in a way that ends discrimination based on ethnicity, religion and territorial belonging, he said he will encourage parties to resolve the conflicts on the basis of a new political dispensation.

♦ Receive daily updates directly in your inbox - Subscribe here to a topic.
♦ Download the UN News app for your iOS or Android devices.
Sudan|security council 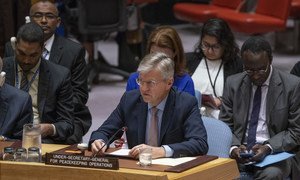 Amidst an increase in criminal activity in the Abyei area, which is contested by Sudan and South Sudan, the United Nations top peacekeeping official on Thursday called for deployment of additional police units, to enhance the UN’s focus on maintaining law and order there, and furthering peace between local communities.