OCHA/Saviano Abreu
28 April 2019: Landslides due to flooding are a major concern in the Mahate neighbourhood of Pemba after Cyclone Kenneth swept across northern Mozambique.

Humanitarian affairs coordination office, OCHA, reported that heavy rains had paused in the morning around the coastal city of Pemba, with aid workers going flat out to prepare relief flights – including medical supplies – to the island of Matemo, one of the worst-hit by the cyclone.

“Certainly the impacts of #CycloneKenneth, just as the impacts of Cyclone Idai, are intensified because of #climatechange and because of sea-level rise.”@UNOCHA, @Refugees, @WFP, @WHO and @WMO provide the latest updates on the situation in northern #Mozambique. pic.twitter.com/D01S4kckTj

“Emergency staff will also do further damage and needs assessments while they can, as more rain is expected in the coming days, turning the response into a start-stop operation”, said OCHA Spokesperson, Jens Laerke, briefing reporters in Geneva.

The Government of Mozambique is reporting that at least 38 people died during the second massive cyclone to hit southern Africa in six weeks, following on from the devastating impact of Cyclone Idai. Kenneth partially or fully destroyed nearly 35,000 houses, close to 200 classrooms; and at least 14 health facilities have been hit, OCHA reported.

Around 21,000 people are now sheltering in accommodation centres, after their villages were wiped out, said Mr. Laerke, adding that some staff who had made an aerial survey, said that “some villages looked like they had been bulldozed.” For the initial response, $10 million has been released for Mozambique by the head of OCHA, together with $3 million for the hard-hit Comoros Islands.

‘Despair evident’ as communities clean up

Spokesperson for the UN refugee agency (UNHCR), Charlie Yaxley, said that “access to the most remote places remains difficult”, with reports that some remain “completely isolated and in need of rescue”. Although the northern areas hit by Kenneth are less populated than other parts of the country, the damage and flooding had been “extensive”.

Drawing on eye witness accounts from UNHCR teams on the ground in Pemba since the weekend, he said parts of the city had been completely flooded. “In the most deprived areas, houses had collapsed, and flash floods left mud and trash all over the streets…Communities are organizing themselves to clean up streets and remove the sand and muck brought by the storms. Despair is evident.”

In the worst affected areas “people have lost everything” said Herve Verhoosel, Spokeperson for the World Food Programme (WFP), noting that thanks to early positioning of supplies, the agency has already reached 11,500 beneficiaries, beginning on Saturday morning.

“The ravages caused by the cyclone are compounded by the impact it has on agriculture, livelihoods and the food and nutrition security situation”. With preliminary Government assessments showing 31,300 hectares of crops lost, hitting at the peak of the harvest season, “the short/mid/longterm availability of food is worrisome”, added Mr. Verhoosel.

He said the agency had already been providing food distributions and nutrition support in some affected districts since last year. “WFP is already working in Mozambique to increase resilience to climatic shocks…This focus becomes even more crucial, and additional funding in that regard after the emergency, will be essential to ensure we can help the country recover”, he added. 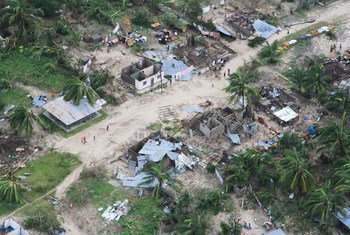 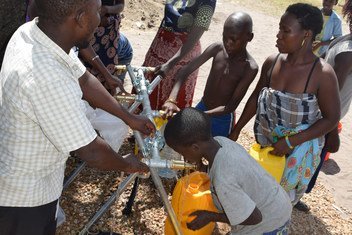