“Such incidents have become all-too-familiar” said António Guterres, citing “Muslims gunned down in mosques, their religious sites vandalized; Jews murdered in synagogues, their gravestones defaced with swastikas” and Christians “killed at prayer, their churches often torched.”

Instead of being safe havens, houses of worship have become targets, he warned, noting that “beyond the murders, there is loathsome rhetoric: xenophobia aimed not only at religious groups but also at migrants, minorities and refugees…venom directed at anyone considered the ‘other’”.

He said that some parts of the internet were rapidly becoming “hothouses of hate, as like-minded bigots find each other on-line”. With “vile views move from the fringes to the mainstream” Mr. Guterres said he was “profoundly concerned that we are nearing a pivotal moment in battling hatred and extremism.”

In response he has set two “urgent initiatives” in motion; the drawing up of UN plan of action to “fully mobilize” the system to tackle hate speech, led by Special Adviser on the Prevention of Genocide, Adama Dieng, and an effort being led by the High Representative for the Alliance of Civilizations (UNAOC) Miguel Moratinos, to help ensure the safety of religious sanctuaries.

“The world must step up to stamp out anti-Semitism, anti-Muslim hatred, persecution of Christians and all other forms of racism, xenophobia, discrimination and incitement”, said the UN chief.

Hatred is a threat to everyone – and so this is a job for everyone” he added. “Political and religious leaders have a special responsibility to promote peaceful coexistence. I will count on the strong support of Governments, civil society and other partners in working together to uphold the values that bind us a single human family”

Summit against hate speech in Geneva

Earlier on Monday, at the UN in Geneva, a major summit to counter hate speech got underway, co-hosted by Adama Dieng.

Warning against a “revival” of ultra-nationalist groups and parties, the UN official warned that they “legitimized violations”, by portraying minorities as a threat to their culture and identity.

“These groups are spreading their incendiary language into mainstream political discourse; we see this in too many countries,” he said, at the event co-hosted with the International Association for the Defense of Religious Liberty (AIDLR). “We need to collectively and actively stop these dynamics and counter them with messages of openness and inclusion.”

“United Nations is taking steps to address the worrying hate speech trends, which are eroding shared values and standards,” — says Adama Dieng, @UN adviser for #genocide prevention at the opening of the Second Global Summit on Religion, Peace and Security. pic.twitter.com/IEDuNNL38v

Just over a week ago, a terror attack on churches and hotels in Sri Lanka claimed hundreds of lives, while in New Zealand on 15 March, an extremist, and self-avowed white supremacist, gunned down 50 mosque worshippers.

He warned that it could degenerate if nothing is done to stop it.

“Over the recent months, violence has reached unprecedented level amid retaliatory attacks and serious violations of human rights in central Mali impacting on all communities,” Mr. Dieng said in a statement. “Unless these concerns are immediately addressed, there is a high risk of further escalation of the situation in which atrocity crimes could be committed.”

Michael Møller, Director-General of UN Geneva, told participants at the Second Global Summit on Religion Peace and Security that hate speech was “spreading like wildfire through social media into the mainstream”.

“It is a menace to our values, to social stability, to peace itself. And such hate speech is in turn the breeding ground for unfathomable evil,” he said, before insisting that the attacks in New Zealand and Sri Lanka represented “the bigotry that says another person is less than my equal, less than human.”

In the face of such horrific events it was nonetheless crucial to remember that most people displayed “understanding, kindness, justice and reconciliation”, Mr Møller insisted. 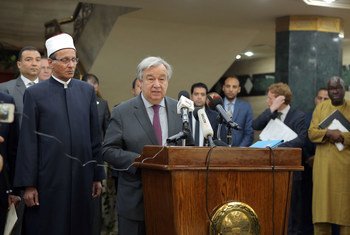 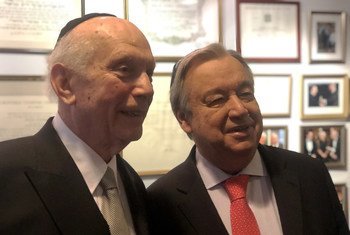