Anne Nuorgam, who is a member of Finland’s Saami Parliament and head of the Saami Council’s Human Rights Unit, described the Forum as an opportunity to share innovations and practices, developed in indigenous communities “over centuries and millennia”.

Noting that 2019 is the International Year of Indigenous Languages, she said that “we have to celebrate our languages, but also take concrete action to preserve them and save those on the verge of extinction”.

Ms. Nuorgam pointed out that in many countries, indigenous children are not taught in their language. Citing Article 14 of the UN Declaration on the Rights of Indigenous Peoples (UNDRIP) , she recalled that indigenous peoples have the right to provide education in their own languages.

“However, this needs financial and technical support from Member States and the UN System”, she stated.

As studies show that children learn best in their own mother tongue, Ms. Nuorgam encouraged everyone to “make sure our children” are connected to their indigenous communities and cultures, as they are “inextricably linked to their lands, territories and natural resources”.

“This enables us to protect our traditional knowledge”, asserted the chair.

Recognizing  UNDRIP  as a "watershed moment" in 2007, General Assembly President Maria Fernanda Espinosa lamented that it still faced implementation challenges, saying that the world has a “historic debt with the indigenous peoples” and that much more must be done to overcome the implementation gap.

She also drew attention to indigenous women, pointing out that while women are key agents of change for tackling poverty and hunger, they face multiple forms of discrimination and violence.

In his opening remarks, Valentin Rybakov, Vice-President of the Economic and Social Council (ECOSOC), explained that the Forum’s expert advice on indigenous peoples’ issues, informs ECOSOC deliberations and decisions. 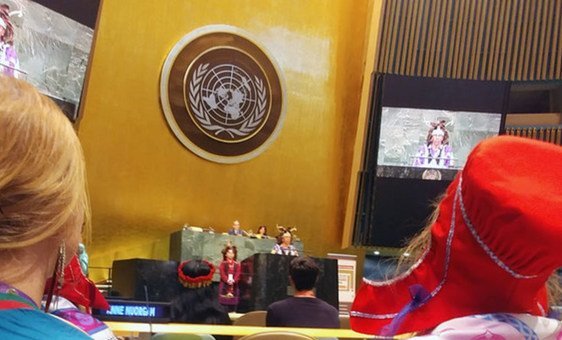 “This is of particular importance in helping us follow up on the implementation of the 2030 Agenda for Sustainable Development”, said Mr. Rybakov.

He mentioned key activities in support of the Sustainable Development Goals (SDGs), including, in September, the first SDG Summit for State heads since the 2030 Agenda was adopted and the UN High-level Political Forum (HLPF) in July to review six of the SDGs, including on quality education, economic growth and combatting climate change.

“These topics are of central importance to indigenous peoples and the attainment of their human rights”, he said, saying that the Permanent Forum and its follow-up activities “demonstrably contributes” to reaching these goals.

“Along with recognition comes the need to acknowledge the source, ownership and protection of traditional knowledge”, Mr. Rybakov said.

The Executive Secretary of the Convention on biological Diversity, Cristiana Pasca Palma, credited her Romanian grandparents – who used traditional agricultural methods passed down for centuries, to till the soil – for nurturing her appreciation of biodiversity and related traditional knowledge.

“All of our ancestors have always lived off the land and waters in one form or another”, she said. “And their traditional knowledge, often transmitted especially through women – grandmother to mother, to daughter – have enabled us as a species to thrive for millennia”.

The session runs from 22 April through 3 May, with regional dialogues to be held during the second week.

Established by the UN Economic and Social Council (ECOSOC) in 2000, the Forum provides it with advice and recommendation on indigenous issues. The 16 independent experts of the Forum – eight nominated by UN Member States and others by indigenous organizations globally – work in their personal capacity.

♦ Receive daily updates directly in your inbox - Subscribe here to a topic.
♦ Download the UN News app for your iOS or Android devices.
annual forum on indigenous issues|UNPFII 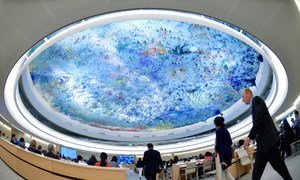 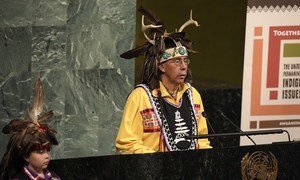 Protecting the land and resource rights of indigenous peoples will not only provide security for historically exploited groups but also help the global fights against climate change and biodiversity loss, said speakers on Monday at the annual United Nations Permanent Forum on Indigenous Issues.