Unless the world faces its “social, economic and environmental challenges head-on”, United Nations Secretary-General António Guterres said on Tuesday, the Sustainable Development Goals (SDGs), will not be met.

Addressing the final plenary of the UN Youth Forum on Tuesday, he warned that “the once-in-a-generation opportunity we have to end poverty and bring lasting prosperity for all on a healthy planet, will have been squandered”.

According to Mr. Guterres, each challenge has one common denominator: “the need for those in power to live up to their responsibilities; to do what is right for people and planet alike”.

Lauding youth’s courage and persistence, he said that “more often than not, young people in our world today are a lightning rod for change”.

“Because it is your future, your livelihoods, your freedom, your security, your environment, you do not, and you must not, take no for an answer,” spelled out the Secretary-General, offering the partnership of the UN on “the journey towards a more peaceful, just and prosperous world”.

He enumerated some of the challenges ahead, including curbing unemployment, poverty and illiteracy, along with various actions he and the UN is taking to meet them.

“To make sure our work is relevant and effective, we need your ideas, your energy and your creativity”, said the UN chief, pointing to their work in inclusion, gender equality and human rights.

He reminded the group that world leaders will meet in New York to catalyze “greater ambition, leadership and action” to achieve the goals of the Paris Agreement and the 2030 Agenda for Sustainable Development saying that the key messages and outcomes of the Forum’s discussions would be shared with decision-makers and policy-makers in those meetings.

“But that is not enough”, he underscored, “We need you to mobilize. We need you to activate your networks. “We need you to engage in the youth-focused events leading up to September, including Youth Day before my Climate Action Summit”.

He urged everyone “above all”, to “be the change we need” and to “push world leaders” to step up their ambition and meet their responsibilities “to do what is right for people and planet alike”.

He pledged the UN’s support as an organization “that truly works with you”.

“Together we can ensure peace, prosperity, opportunity and dignity for all on a healthy planet”, he concluded.

For her part, President of the UN Economic and Social Council (ECOSOC) Inga Rhonda King said that without youth, “we will not be able to move forward”.

She called on countries to “engage young people in a meaningful way to make our world a better place” and encouraged them to be inclusive, involve youth in decision-making and to listen. 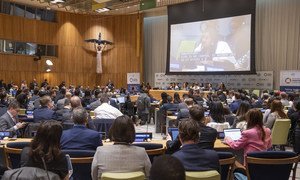