WHO/M. Nieuwenhof
Children in the Dondo district of Mozambique are vaccinated against cholera.
9 April 2019
Humanitarian Aid

Nearly one month after Cyclone Idai slammed into the southeast African coast, the streets of Mozambique’s busy port city of Beira are “returning to life” as the search for survivors continues throughout neighbouring Zimbabwe, the International Organization for Migration (IOM) said on Tuesday.

The roof of Pekina’s house blew off on the first day of Cyclone Idai. Rain continues to leak through the sheets and plastic that were pieced back together. Despite these challenges, she is spending time to set up tents for displaced families in Beira, Mozambique. #CycloneIdai pic.twitter.com/xFjcWL7KgF

According to IOM, freighters and other heavy vessels are once again plying the shipping lanes along Beira’s waterfront, while beachfront bistros attracted enough business last weekend, to cause traffic jams.

“The challenge now is shifting to the outlying countryside”, IOM said, pointing to Beira’s Buzi River district in the southwest, which was only accessible by helicopter until last week.

As of Monday, the 14 March disaster has left 602 dead in Mozambique.

Stating that it would begin sending damage-assessment teams there this week, IOM painted a picture of searchers driving for hours “on mostly dirt roads”, staying “several days at a time in rural villages”.

Meanwhile, IOM’s Displacement Tracking Matrix teams have been working through the forested areas of Manica and Macate provinces, assessing the needs of internally displaced people living in temporary shelters.

Back in Beira, schools are beginning to relocate the internally-displaced families who sheltered in classrooms during the first hours of the cyclone.

Last weekend, 50 families were relocated from the Matadouro school to the Sao Pedro emergency camp on the outskirts of the city, which IOM recently prepared with the assistance of military firefighters sent by the Brazilian Armed Forces.

On Monday, IOM helped set up a much larger settlement closer to the centre of Beira, on the grounds of the Samora Machel secondary school, by assisting in installing a flexible reservoir that holds 30,000 liters of potable water.

“My colleagues and I are working early morning until evening, seven days a week to help bring water to affected communities”, Antonio, a government installer, told IOM.

“I was displaced to Malawi, so I know very well how difficult it is to be displaced,” he explained, referring to his forced fleeing home during recent conflict. “While I was in Malawi I volunteered and worked with the Red Cross. It feels really good to be able to help.”

‘Stop cholera in its tracks’

Some 2,772 cases of cholera have been reported, with six people succumbing to the disease. Thousands of people have received oral cholera vaccine during a six-day emergency campaign, which ended on Monday. 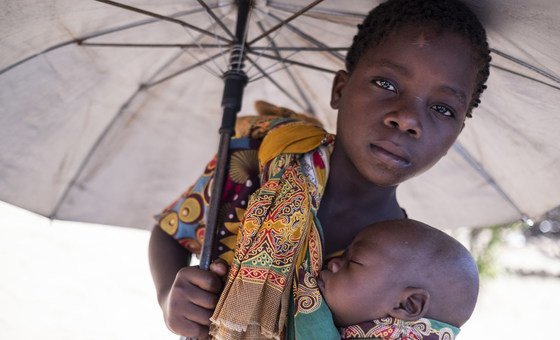 UNICEF/DE WET | Aruminda holds her brother, Antonio, at a camp set up for displaced people at the Jehovas Witness Centre in Dondo, Mozambique. Cyclone Idai displaced thousands of people.

Run by Mozambique’s Ministry of Health, with support from the World Health Organization (WHO), UN Children’s Fund (UNICEF) and other partners, nearly 900,000 cyclone survivors were inoculated.

“This campaign would not have been possible without the strong engagement of the local authorities and the communities themselves” said Djamila Cabral, the Head of WHO in Mozambique. “The number of volunteers is impressive and, wherever they go, there has been very strong uptake of the vaccine. Everyone is very keen to make this a success to stop cholera in its tracks.”

In Zimbabwe, which along with Malawi also suffered damage from the cyclone, IOM teams visited Manicaland to assess the needs of those living in the Chimanimani and Chipinge districts.

Around 270,000 people were affected by the flooding, with the agency reporting that an estimated 21,000 were displaced, many from in Kopa and Ngangu, two Chimanimani communities where more than 77 households were reduced to rubble and 305 people remained missing.

In response to the crisis, IOM has launched a $7.2 million appeal to the international community to provide multi-sectorial humanitarian assistance to 90,000 people, including for shelter and food items, displacement tracking, psychosocial support and early recovery.

♦ Receive daily updates directly in your inbox - Subscribe here to a topic.
♦ Download the UN News app for your iOS or Android devices.
Cholera|Cyclone Idai 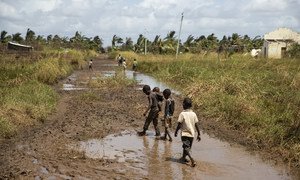