Proposed changes to Brunei’s penal code to incorporate punishments under a strict interpretation of Islamic law - including death by stoning - should be halted, the UN’s top human rights official, Michelle Bachelet, said on Monday.

In an appeal to the Bruneian Government to stop what she described as “draconian” revisions, due to come into force on Wednesday, High Commissioner Bachelet maintained that they “would enshrine in legislation cruel and inhuman punishments that seriously breach international human rights law”.

According to a statement from Ms. Bachelet issue by her office, OHCHR, the death penalty would in theory be applicable for offences such as rape, adultery, sodomy; extramarital sexual relations for Muslim citizens; robbery, and insult or defamation of the Prophet Mohammad.

Public flogging as a punishment for abortion would also apply, as well as amputation for theft, once the proposed revisions become law. Other changes include making it a criminal offence to expose Muslim children “to the beliefs and practices of any religion other than Islam”, Ms. Bachelet said, before describing them as potentially marking “a serious setback” for human rights protections in the south-east Asian State. The oil-rich country has been ruled by Sultan Hassanal Bolkiah Mu’izzaddin Waddaulah, for more than 50 years.

Although the death penalty is already on the statute books in Brunei, the last execution there was carried out in 1957. Nonetheless, Ms. Bachelet stressed that under international law, capital punishment may only be applied for murder or intentional killing, after a trial held according to due process.

“I urge Brunei to maintain its de facto moratorium on the use of capital punishment,” she said, underlining that “human rights and faith are not opposing forces”.

She added: “No judiciary in the world can claim to be mistake-free and evidence shows that the death penalty is disproportionately applied against people who are already vulnerable, with a high risk of miscarriages of justice.”

Echoing concerns about the country’s penal code by UN human rights panels in the past, Ms. Bachelet highlighted the possible encouragement of violence and discrimination against women, including on the basis of their sexual orientation, and against religious minorities in Brunei.

“Any religion-based legislation must not violate human rights, including the rights of those belonging to the majority religion, as well as of religious minorities and non-believers,” Ms. Bachelet said.

“It is vital that the Government, religious authorities and a wide range of civil society actors work jointly to uphold human dignity and equality for all,” the High Commissioner added. “My Office stands ready to assist the Government of Brunei, using the constructive approach laid out by the faith-based framework of the Beirut Declaration on ‘Faith for Rights’.

♦ Receive daily updates directly in your inbox - Subscribe here to a topic.
♦ Download the UN News app for your iOS or Android devices.
Brunei|death penalty 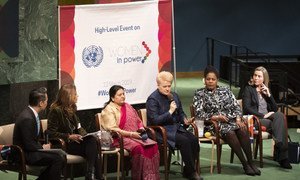 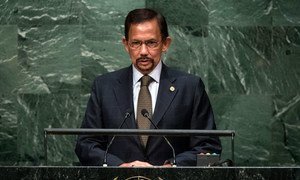 Despite what some people may say about its effectiveness, the Sultan of Brunei today told world leaders in the General Assembly that the United Nations has no equal, and 70 years of existence is a testament to its relevance.