OCHA/Rita Maingi
Displaced women and their babies in Beira, the port city in Mozambique that was slammed by Cyclone Idai.
27 March 2019
Humanitarian Aid

UNFPA Representative in Mozambique, Andrea Wojnar, said their main challenge was “to provide women and adolescent girls, especially those who are pregnant and lactating, with lifesaving sexual and reproductive health services”. Cyclone Idai affected more than 75,000 pregnant women, with 45,000 births expected over the next six months, she said, 7,000 of which are at risk of “life-threatening complications” due to the flooding and destruction.

Touring several facilities and communities in Dondo District, in hard-hit Sofala Province, Ms. Wojnar was “devastated” to see young girls giving birth in maternity wards with enormous holes in the roof, and nurses living with their families in muddy tents next to the cyclone-battered clinics.

“With at least 35 health facilities fully or partially destroyed, and health workers themselves left homeless or stricken”, said the UNFPA Representative, “we are working around the clock with the Government and other partners to restore basic maternal and child healthcare”.

As part of its revised humanitarian response plan, UNFPA is appealing for more than $9 million to provide reproductive health supplies and services to Mozambique – with prevention and response to gender-based violence a main priority.

Women and girls, more at risk

Women and girls are at greater risk of exploitation and sexual violence when they are dislocated from their communities, says UNFPA. Noting that “many do not have safe places to sleep or go to the latrine”, Ms. Wojnar explained that when they lack food and basic necessities, “women and girls can fall prey to predators and opportunists”.

The agency is working to establish safe spaces for women and girls, “where they can go for information, psychosocial support, and referrals to medical and legal services, especially if they have been assaulted or victimized,” she stated.

“We are also distributing ‘dignity kits’ that contain sanitary pads, underwear, African cloth for clothing, soap, toothbrush and toothpaste, and a security whistle”, she said. “All are very basic items, but ones that uphold women's dignity through hygiene and safety.”

Saw impact of #CycloneIdai today & delivered food in Guarra Guarra village. Worst storm in 200 years — so many farmers lost everything. @WFP has helped 120k people so far, scaling up to 500k soon, then 1.7 million. Needs are great —$150 million just for food in next 3 months pic.twitter.com/PC5QRtda1Y

At the end of a two-day visit to Mozambique, the Executive Director of the World Food Programme (WFP), David Beasley, said that the international community must step up support to victims of the cyclone and flooding that have devastated large areas of the country.

After arriving on Tuesday to Beira, the port city of half a million people that was slammed by Cyclone Idai , Mr. Beasley flew over the nearby town of Buzi, which had been all but submerged by raging floodwaters.

In the isolated village of Guara Guara he met survivors receiving WFP-airlifted assistance.

“They’re going to need help at least for the next six to 12 months to get back on their feet,” he continued. “We need the international community to rally behind the victims of this storm with major financial support, so WFP can help the survivors of Cyclone Idai.”

An estimated 400,000 hectares of primarily maize crops were washed away just weeks ahead of the main April–May harvest. Other key sources of income, like livestock and fisheries, have also been badly affected.

Victims will need sustained support until they can get back on their feet, which in the case of subsistence farmers, would be until the next main harvest in mid-2020.

“We need to work together with the Government of Mozambique and the communities to ensure rehabilitation is done in a way that will prevent this devastation happening again, build better everything: houses, schools and health centres to stand the shocks,” concluded Mr. Beasley.

The first of three planes carrying relief items from the UN Refugee Agency (UNHCR) landed early on Wednesday morning in the Mozambican capital, Maputo. The supplies – including tents, sleeping mats, mosquito nets, and solar lanterns – will be distributed to 30,000 people in Mozambique, as well as Malawi and Zimbabwe.

The World Health Organization (WHO) is providing supplies to treat diarrhoeal diseases and cholera, and helping to set up three cholera treatment centres. The agency is also putting together a specialist “surge team” for Mozambique, of more than 40 people, with expertise in logistics, epidemiology, outbreak prevention and response.

♦ Receive daily updates directly in your inbox - Subscribe here to a topic.
♦ Download the UN News app for your iOS or Android devices.
Cyclone Idai|mozambique 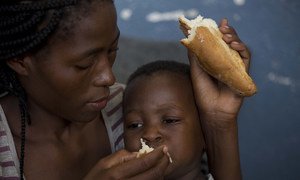 Cyclone Idai and the mounting death toll is “yet another alarm bell about the dangers of climate change” UN Secretary-General António Guterres said on Tuesday, warning that vulnerable countries like Mozambique, would be hit the hardest unless urgent action is taken by nations across the world. 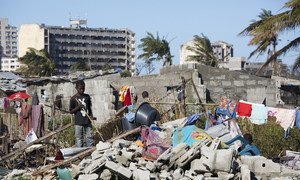 Efforts are continuing to reach all victims of Cyclone Idai in southern Africa where a senior relief chief has warned of a “water, sanitation and hygiene ticking bomb”, as the scale of the emergency continues to unfold, and the official death toll rises.