WFP/Photo Library
Over 900,000 people in Malawi, and 600,000 in Mozambique have already been affected by exceptionally severe flooding caused by heavy rains associated with the Tropical Cyclone Idai.

Dire conditions persist in vast areas of southern Africa affected by Cyclone Idai as heavy rain continues to cause “massive destruction”, the UN said on Thursday, while aid teams scale up efforts to reach those most in need.

Warning that the situation is likely to deteriorate, the World Food Programme (WFP) said that people are still stranded on rooftops after the storm began its sweep through Mozambique, Malawi and Zimbabwe six days ago.

In Mozambique alone, the agency is seeking more than $121 million to help 1.7 million people affected through the next three months, WFP spokesperson Hervé Verhoosel said, after the Government declared a state of national emergency.

Sofala and Manica provinces were worst-hit, and extensive damage has been caused to major roads and bridges which are now impassable.

Power networks have also been severed and are unlikely to be restored for several weeks, while thousands have lost their homes, Mr. Verhoosel told journalists in Geneva, noting that WFP drones are being used to help locate stranded populations.

According to Mozambique’s National Disaster Management Institute (INGC), more than 100,000 people are still “isolated” and without assistance in Chimoio, Dombe and other locations in Manica province.

The situation “is likely to deteriorate even more and the numbers of people affected is expected to increase as it is raining there as we speak”, Mr. Verhoosel added.

To date, WFP has provided food assistance to more than 20,000 people in Sofala, Manica, Tete and Zambezia; it aims to reach 600,000 people in the next four weeks.

In Zimbabwe, 200,000 people urgently need food assistance in the coming three months, according to WFP.

Conditions in the hardest-hit district, Chimanimani, are severe, Mr Verhoosel explained, with 90 per cent of property significantly damaged.

Chimanimani is located in Manicaland province in eastern Zimbabwe, where heavy rains in both Manicaland and neighbouring Masvingo province to the south “continue to cause massive destruction”, according to WFP.

To respond to urgent needs, the agency is seeking more than $5 million to provide food, air and logistical support for the flood response.

In Malawi, where Cyclone Idai had a limited impact, 920,000 have been affected by flooding that began on 5 March, according to the Government.

People are beginning to return home and WFP has started food distributions to the worst-hit districts of Nsanje, Phalombe, Chikwawa and Zomba.

Underscoring the huge logistical challenges of the aid operation, Mr. Verhoosel explained that a WFP airplane reached the Mozambican port of Beira soon after the disaster happened, in extremely difficult conditions.

Aid has to be unloaded by hand, ‘box by box’

“That was probably the first cargo (plane) to land,” he said. “The food from that cargo is not yet fully distributed. The problem that we have is more the access…because most of the people are on rooftops or in a place that we cannot access by road.”

Mr. Verhoosel also highlighted ongoing challenges in Beira, where 90 per cent of the port city was damaged by Idai.

“In the port for the moment, you have no infrastructure,” he said, adding that the situation was the same at the airport, where people had to unload food by hand, “box by box”.

“In Beira, the level of water is not the same as in the countryside… inland, the problem is that you have basically water all around,” Mr Verhoosel said.

The UN Population Fund (UNFPA), is providing humanitarian assistance to Mozambique in the aftermath of Idai, to protect the health and well-being of women, through services for sexual and reproductive health and prevention of and response to gender-based violence (GBV).

Given the urgent needs, UNFPA said it was providing the following relief: 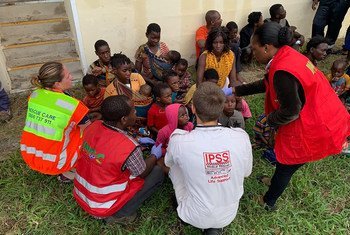 As the full scale of the devastation caused by Cyclone Idai in southern Africa continues to be assessed, the UN and humanitarian partners are ramping up the provision of emergency food, shelter, water and health care supplies to hundreds-of-thousands who have been affected across Mozambique, Malawi and Zimbabwe. 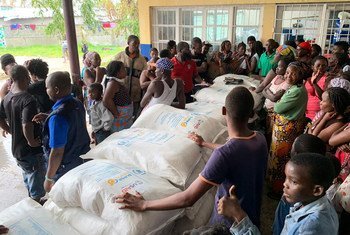 The full scale of the devastation caused by Tropical Cyclone Idai in south-west Africa is becoming clearer, the UN said on Tuesday, warning that the emergency “is getting bigger by the hour”.