The Fall Armyworm pest is continuing to sweep across the globe, having moved eastwards from their native Americas, onto Africa, before arriving in Asia only last summer, where they now threaten to cost farmers from India to Thailand, billions of dollars in lost production.

The UN Food and Agriculture Organization (FAO) has convened a three-day meeting of international experts in Bangkok and officials from affected countries, who on Wednesday began discussing what to do about stopping the onward march of the crop-guzzling insects, and limiting the devastation they cause.

"We are here today – together – because we share a growing sense of alarm – but also to learn from each other, particularly from those countries who’ve already been responding to their own infestations, said Kundhavi Kadiresan, Assistant Director-General and FAO Regional Representative for Asia and the Pacific.

“We need to work together because this is a pest that has no respect for international boundaries, threatens our food security, our economies, domestic and international trade, and of course the smallholder farmer who wakes up one morning to a cash crop under attack.”

Fall Armyworm is ‘here to stay’

Fall armyworm (FAW for short) have been moving steadily east since 2016 and caused up to $3 billion-worth of damage to crops across Africa, according to reports. They lay eggs which develop fast into grubs, which can devastate crops such as maize, rice and sugarcane, overnight.

India began to suffer the effects of the flying invaders in July, and the insects have now reached Sri Lanka, Bangladesh, Myanmar, Thailand, and China’s Yunnan province, said FAO.

In the case of Sri Lanka, there were reports that up to 40,000 hectares had been infested, damaging some 20 percent of its crops. China is the biggest maize producer in Asia, and second largest producer globally.

“When Fall Armyworm made landfall in India, its arrival did not come as a complete surprise, we were not caught unaware. And that’s a good start – indeed it was a good head start,” Mr. Kadiresan said.

The Plant Protection Commission for Asia and the Pacific began raising awareness about the threat early last year, sharing key information on the pest, its spread towards Asia, and how to manage it sustainably in case of infestation.

Once an infestation is confirmed, governments are initiating efforts to continue to raise awareness and monitor the presence and spread of FAW on maize, their favourite food type, and other crops.

FAO has been working with the relevant authorities to initiate awareness programmes that inform and train farmers on integrated pest management techniques. These include identifying the grub's natural enemies, enhancing natural biological controls and mechanical controls, such as crushing egg masses and using biopesticides.

This is taken into consideration at policy and field level. With these measures put in place, the negative effects of infestations can be sustainably managed and can help to maintain populations low enough to limit economic and livelihood damage. 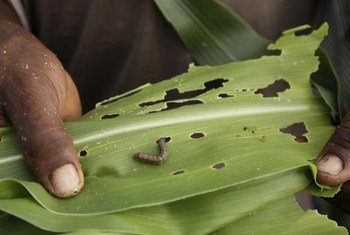 Fears for food security and the future of farming families, as Fall Armyworm spreads to Asia

An “invasive pest” that devours more than 80 different plant species, including many staple crops, could threaten the food security and livelihoods of millions of small-scale farmers in Asia, the Food and Agriculture Organization (FAO) warned on Tuesday. 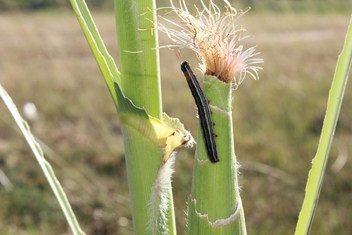