UNIC Buenos Aires/Mariano Solier
UN Secretary-General during his address in the plenary of the UN High-Level Conference on South-South Cooperation in Buenos Aires, Argentina.

South-South cooperation is key to the world’s sustainable development and the fight against global warming said the United Nations Secretary-General on Wednesday, as the opening session of the Second UN Conference on South-South Cooperation got underway in the Argentine capital, Buenos Aires.

António Guterres reminded top politicians, business and civil society leaders that the BAPA+40 conference, as it’s known for short, will enhance the ground breaking agenda laid out at the first conference 40 years earlier, which adopted the Buenos Aires Plan of Action for Promoting and Implementing Technical Cooperation among Developing Countries (BAPA).

He said this week was an opportunity to recommit, develop and strengthen frameworks for South-South cooperation – between the developing countries of the Global South - as well as improve systems and tools, increase transparency, and strengthen accountability.

“BAPA transformed the dynamics of international cooperation”, the UN chief said. “It highlighted the value of a different form of cooperation, based on the exchange of knowledge and appropriate technologies among nations facing similar development challenges”, he continued, adding that cooperation can enable developing countries to learn from each other and grow more quickly, close income gaps and build inclusive, resilient societies.

The UN chief underscored the main challenges that assembled leaders could help overcome, crucial in order to reach the 2030 Sustainable Development Goals, and the objectives of the 2015 Paris Agreement which commits countries to keep global warming to well below 2 degrees Celsius.

Firstly, there is rising inequality both between and within countries, eroding trust worldwide and deepening a sense of injustice. Secondly, the climate change battle was only getting more intense, he said.

“2018 was the fourth hottest year on record and natural disasters are impacting nearly every region”, he said, explaining to member States that they must enhance nationally determined contributions by 2020, in line with reducing greenhouse gas emissions by 45 percent over the next decade.

“South-South cooperation will be vital to ensure mutual support and exchange of best practices, to enhance adaptation and increase the resilience of developing countries and communities facing the devastating impacts of climate change. "

“South-South Cooperation can also support the transformation of economies dependent on fossil fuels, with strategies that reinforce both sustainable development and environmental protection”, Mr. Guterres added.

Third on the list, the need to improve infrastructure, especially in cities, as energy demands rise across the Global South: “Some 60 percent of the area that is expected to become urban by 2030, has yet to be built. If we get this wrong, we will lock ourselves into a high-emissions future with potentially catastrophic consequences”, the UN chief underscored.

Fourthly, the UN chief said that although there has been significant progress in achieving gender equality over the years, the gap was widening. “This affects us all, because where women are better represented in politics, we see improved social protection and increased spending on development,” he noted adding that “when women have access to land and credit, harvests increase. When girls are educated, they contribute more to their communities and break cycles of poverty.”

Finally, he said international institutions needed to do work harder to support the countries represented in Buenos Aires: “South-South cooperation has evolved significantly over the last decades – but multilateral institutions, including the United Nations, have not kept up”, he said, adding that he was grateful to Member States for acknowledging the role of the UN in the outcome document of the Conference, which will be adopted on Friday.

The Secretary-General warned, however, that South-South Cooperation can never be a substitute for official development assistance or replace the responsibilities of developed nations, and that it must involve young people, civil society, the private sector, academia and others to build innovative partnerships.

UNIC Buenos Aires/Mariano Solier
UN Secretary-General and the President of Argentina, Mauricio Macri, visiting the pavilion of Argentina in an expo part of the UN High-Level Conference on South-South Cooperation.

“South-South cooperation is a global exercise of all countries of the South to benefit everyone, including the Least Developed Countries. Every country, every partner has something to share or teach, whatever their circumstances”, Mr. Guterres added, saying that now is the time to take bold and transformative action.

“Together, we can achieve the Sustainable Development Goals, beat climate change, and transform the lives of people around the world”, the UN chief concluded.

The President of the General Assembly, Maria Fernanda Espinosa, said BAPA was a symbol of the determination of the Global South to advance equality for all, across the world:

“The people in New York or New Delhi, in Paris or Pretoria, in Quito or Helsinki, they all share the same dream: a decent job, health and education, a safe and healthy environment, a government that listens and responds, an efficient international system and with tangible results”, she said.

“But these dreams, which seem so elementary, are increasingly distant”, Ms. Espinosa noted. “It is clear that we are helping to restore confidence and the effectiveness of international cooperation and multilateral action. South-South Cooperation represents the best of our people. The principles of solidarity and acting for the common good, make South-South cooperation a powerful force”, she declared. 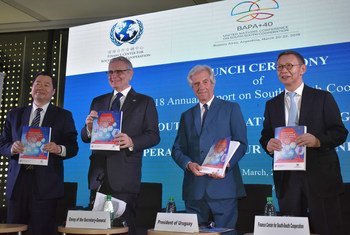 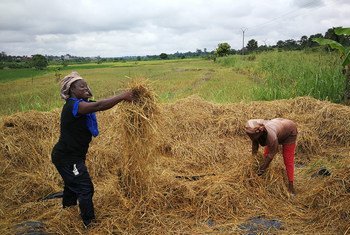