On the side-lines of the Commission on the Status of Women, the UN Global Compact – the world’s largest corporate sustainability initiative – brought together business leaders from around the world to a roundtable at UN Headquarters in New York on Thursday, to find ways to address the stumbling blocks to gender equality.

There are many concrete examples of the private sector moving in a positive direction, with regard to gender equality, and tackling systemic sexual harassment and discrimination in the workplace. These include the promotion of women’s representation on corporate boards, a demand for greater investment in companies owned by women, and a recognition that gender equality is a critical business issue.

Another powerful statement of intent is the CEO Statement of Support for the Women’s Empowerment Principles; an initiative of UN Global Compact and UN Women, which cover the range of ways that business can advance gender equality in the workplace. So far, over 2,000 global business leaders have signed up, and hundreds of companies around the world are using the Principles to inform their gender equality strategies.

However, resistance to gender equality initiatives has been identified as a problem that needs to be recognized and addressed. UN Global Compact has identified a number of reasons for the backlash.

There will be people who push back, shy away or fail to see the value of our action to advance equality. But we must keep moving forward. Lise Kingo, CEO and Executive Director of the UN Global Compact

These include a lack of understanding of the issue, which can occur when the business case for gender equality is not adequately explained; industry norms, where there is a persistent belief that some industries are better suited to either men or women; and fear of a loss of opportunities, status and position if there are gains made by women in the workplace.

“We can’t afford to take two steps back for every step forward,” said Lise Kingo, CEO and Executive Director of the UN Global Compact, in a statement. “Gender equality is not only the right thing to do, but it also makes business sense. As we push for progress, there will be people who push back, shy away or fail to see the value of our action to advance equality. But we must keep moving forward.”

Alan Joyce, the Chief Executive of Australian airline, Qantas, and a participant in the roundtable, believes that, with the right commitment, companies can do a lot to bring about gender equality more quickly, and influence society in the process.

Speaking to UN News after the CEO summit, Mr. Joyce said that, in an industry with strong gender stereotypes, Qantas has attempted to change perceptions, by prioritising images of female pilots and male cabin crew, and setting an ambitious target to reach gender parity amongst the company’s new pilot intake within 10 years.

Mr. Joyce accepts that, to achieve this goal, wider changes in society will be needed. Pilots need to be educated in STEM (Science, Technology, Engineering and Mathematics) related subjects but, today, only 13 per cent of girls are taking STEM subjects in school. However, “there is no point,” he said, “in blaming government or society for the slow pace of change, when the private sector can do a lot to influence change.”

The CEO Roundtable was organized by UN Global Compact and Male Champions of Change, a coalition of international business and government leaders established by Elizabeth Broderick, an independent expert on the UN Working Group on Discrimination Against Women. 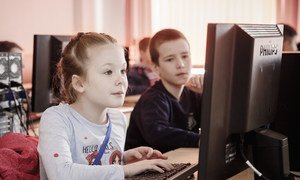 Bridging the ‘gender digital divide’ is about more than ensuring that women and girls have basic access to the Internet and cell phones; it means providing training so they have the skills to use information and communications technologies (ICTs) to their benefit, and taking active measures to boost the numbers of women in ICT leadership positions, including in academia and entrepreneurship. 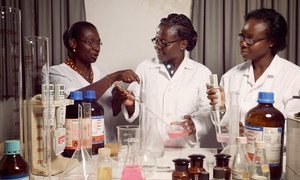