Ceremonies were held at UN Headquarters in New York and Geneva on Friday, to remember and honour the staff who died on board Ethiopian Airlines Flight 302, which crashed near Addis Ababa last Sunday, killing all 157 passengers and crew.

We come together in sadness and solidarity to pay tribute to our fellow UN family members who perished,” said UN Secretary-General António Guterres, after laying a wreath in remembrance of the 21 staff members who lost their lives.

In doing so, we also remember all the victims of the air crash that claimed so many lives – including civil society partners and humanitarian workers,” he said, sending the Organization’s “deepest condolences and heartfelt wishes to their families and loved ones during this extremely difficult time.”

He also expressed condolences to the people and Government of Ethiopia, who lost nine of their citizens on board.

Addressing a sombre gathering in the lobby of the Secretariat building, Mr. Guterres described the diverse group of UN staff who perished as coming from “many areas of expertise” and nations around the world, and yet together, he said, “they also were a mirror of the United Nations: they really represent what the United Nations is, and the best of the United Nations.”

“Women and men; some in the beginning of their careers, others closing in on retirement but each on an individual mission, but at the same time together, representing our larger quest – doing their part, in solidarity with all of us, to build a better world, brick by brick, deed by deed, day in and day out.”

The Secretary-General concluded by calling on all across the UN system, to “continue that mission.”

'None will ever be forgotten'

In Geneva, Director-General Michael Møller, told the ceremony of commemoration there, that those who died “were all our heroes”, adding that the tragedy gave everyone within the “vast and varied family” of the UN, the opportunity to reflect on why they serve:

“I like to think that it’s above all else because of our shared belief that we can make the world a better place. To carry on our work wherever we can make a difference; no matter how high the risk, no matter how distant the reward; no matter, even, how faint the hope may seem at times.”

Our colleagues will be remembered for doing just that, he said. “Their legacy, their memory, the example they set for all of us - none will ever be forgotten.” 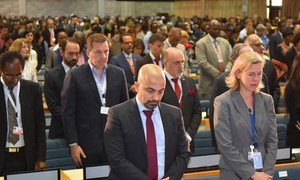 United Nations flags flew at half-mast around the world on Monday to honour the more than 150 people killed in Sunday’s Ethiopian Airlines crash, including at least 21 UN workers. 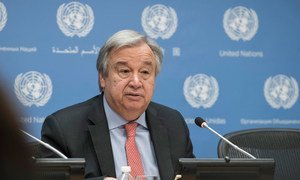