The UN human rights office (OHCHR) has welcomed the signing of an executive order by the Governor of California, in the United States, to impose a moratorium on carrying out the death penalty, which grants a reprieve to 737 inmates, up to end of his term in office.

According to news reports, although the state hasn’t executed anyone since 2006, California’s death row holds the highest number of prisoners, more than a quarter of the country’s total, and six out of 10 of them are people of colour.

OHCHR spokesperson Marta Hurtado, said in a statement to journalists that the executive order “consolidates a trend in the US towards the eradication of the death penalty – in law or in practice – over the last decades,” as 20 US states have already abolished it. California now joins three other states whose Governors have put an executive hold on executions.

However, the order can only prevent sentences from being carried out, but the law still empowers prosecutors to request capital punishment, and allows judges to sentence convicted prisoners to death.

“We hope this moratorium will encourage other states to follow suit, and be followed by a complete abolition of capital punishment at the state and federal level,” Ms. Hurtado added, stressing that with this decision, “California joins the international trend towards the reduction and eventual abolition of the death penalty.”

The decision of the California Governor, Gavin Newsom, comes after the states’ voters rejected attempts to abolish capital punishment and approved in 2016 a ballot measure to actually speed up executions.

In a public statement, Mr. Newsom said “I do not believe that a civilized society can claim to be a leader in the world as long as its government continues to sanction the premeditated and discriminatory execution of its people,” adding that the death penalty was “inconsistent” with the “bedrock values and strikes at the very heart of what it means to be a Californian.”

The Governor cited a report estimating that 1 in every 25 people on death row is innocent. "If that's the case, that means if we move forward executing 737 people in California, we will have executed roughly 30 people that are innocent", Mr. Newsom said. "I don't know about you. I can't sign my name to that. I can't be party to that. I won't be able to sleep at night."

♦ Receive daily updates directly in your inbox - Subscribe here to a topic.
♦ Download the UN News app for your iOS or Android devices.
United States|death penalty 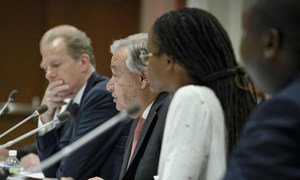