UNHCR/Andrew McConnell
A Syrian refugee boy in Lebanon, who is the same age as the war that has engulfed his country for the past eight years.

Foreign ministers from more than 50 countries gathered on Thursday at a joint European Union-UN pledging conference, and pledged to provide a record $6.97 billion, to support millions of Syrians in need both inside the country, and sheltering in host communities beyond its borders.

In a video appeal earlier in the day to those attending the third major conference of it's kind for Syria, in the Belgian capital, Brussels, UN Secretary-General António Guterres urged countries to renew their "financial, humanitarian and political commitments to the Syrian people, and to the countries and communities hosting refugees”.

He added: “Only a political solution based on Security Council Resolution 2254 can bring sustainable peace to Syria.”

UN emergency relief chief and head of OCHA, Mark Lowcock said he was "pleased with this important signal of the international community’s solidarity with the people in Syria and with Syria’s neighbours who are hosting huge numbers of refugees, and feeling the strain of their generosity."

In 2017, donors pledged $6 billion in Brussels and in 2018, $4.4 billion. Total fundraising for 2018 reached just over $6 billion by the end of the year. Thursday's target, was to reach $8.8 billion to go towards the Syria Humanitarian Response Plan, and Regional Refugee and Resilience Plan. Fundraising wil go on throughout the year, said OCHA.

"Having a clarified position on funding levels so early in the year gives us confidence that we will be able to sustain a very high level of programming throughout the year," said Mr. Lowcock.

In his main appeal from the podium to donors earlier, Mr. Lowcock expressed increasing alarm at the deteriorating situation in Idlib in the north-west of Syria, where more than 90 people were killed by shelling and airstrikes last month, nearly half of them children.

A single stark message from Syrians is left ringing in our ears: they want to live in safety.Yet attacks continue on civilians.My remarks at #SyriaConf2019 https://t.co/f2TVcaUWIH#InvestInHumanity#NotATargetPic @UNICEF pic.twitter.com/JNvHXPd8sh

His comments follow reported airstrikes on the opposition-held Governorate of Idlib, which is home to around three million people and numerous armed groups, who established themselves there are being driven from previous rebel strongholds.

Describing the conflict as “one of the great crises of our time”, Mr. Lowcock added that a large-scale military assault on Idlib “would create the worst humanitarian catastrophe the world has seen in the 21st century”.

Elsewhere in Syria, “many places are calmer than a year ago”, the UN official added, before warning that the “last pockets of ISIL-controlled land” in the north-east are experiencing “ongoing and even escalating violence”.

Apart from the constant threat of violence, Syrian families face increasing hardship, Mr. Lowcock explained, with eight in 10, living below the poverty line and food-costs six times higher than before the war.

Healthcare provision is “hopelessly inadequate”, the UN official continued, from maternal to reproductive services, nutrition support and treatment for disease, while the majority of the 6.2 million people displaced inside Syria need help with shelter.

UN High Commissioner for Refugees, Filippo Grandi, warned that “needs are becoming more, not less severe” for Syrian refugees and host communities in neighbouring countries and the “many” Syrians returning home.

Despite these returns, Mr. Grandi suggested that it would be some time before larger numbers of people left neighbouring countries, owing to huge level of destruction to basic infrastructure inside Syria, along with ongoing insecurity and a lack of basic essentials.

The High Commissioner called for “more predictable investments” from donors to alleviate the strain on host communities in Lebanon, Turkey, Jordan, Egypt and Iraq, where governments were finding that it was “a difficult sell for them to tell their populations that they have to continue to host large numbers of Syrians”.

Conflict ‘not over yet’: EU’s Mogherini

Conference co-host Federica Mogherini, the EU’s top foreign affairs official, underlined the need to show solidarity with the people of Syria and demonstrate support for a UN-led political solution. The more than eight-year conflict is “not over yet”, she said.

“We want the people of Syria not to be forgotten at a moment when the international community seems to care a little bit less about this,” Ms. Mogherini added. “A military situation…might be developing in one sense or another, but what is clear to anybody is that winning the peace will require a political, Syrian-owned process led by the United Nations in Geneva.”

Today, 12 million Syrians are either refugees or displaced inside Syria, around half of the pre-war population.

Under the UN appeal, $3.3 billion is required to help those displaced inside Syria, and $5.5 billion is needed for refugees and host communities in neighbouring countries. 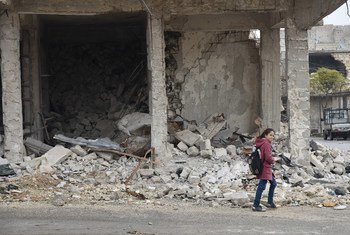 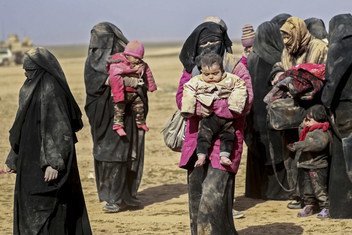