© UNICEF/UN0150811/Gilbertson V
An armed police officer (left) patrols outside a classroom of first graders where the windows have been covered with sandbags, at a school in Marinka, Donetsk Oblast, Ukraine.
7 March 2019
Peace and Security

What is happening in and around Ukraine is “unacceptable, the Chairperson-in-Office for the Organization for Security and Cooperation in Europe (OSCE) told the United Nations Security Council on Thursday.

“The crisis goes against everything the OSCE and the UN stand for,” continued Slovakian Foreign Minister Miroslav Lajčák in his briefing on OSCE’s activities.

In late February 2014, the situation in Ukraine went from political crisis, to violent confrontation and, later, became a full-scale conflict between Government forces and separatists, in the country’s east. 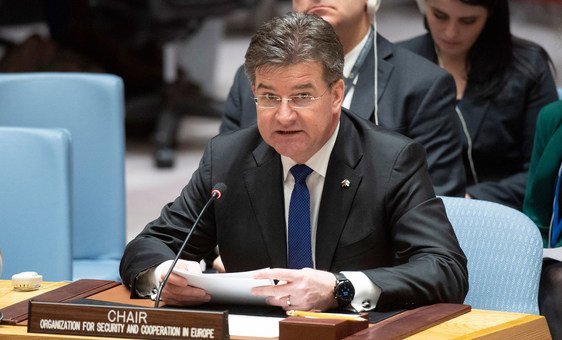 Foreign Minister Miroslav Lajčák of the Slovak Republic, Chairperson-in-Office of the Organization for Security and Co-operation in Europe (OSCE), and former President of the General Assembly, briefs the Security Council., by UN Photo/Eskinder Debebe

While stressing the importance of the various accords on the situation in Ukraine, including the Minsk Agreements, the only “agreed framework” for halting the guns in eastern Ukraine and the Trilateral Contact Group, consisting of OSCE, Russia and Ukraine, he spelled out: “We cannot simply wait patiently for progress to happen. There are too many people suffering, as we speak.”

Mr. Lajčák shared his experience in traveling to the country in January, saying “It was my first trip as Chairperson. And it is not one I will forget.”

He spoke of the elderly in the Luhansk region “on sticks or in wheelchairs” who each day make a risky journey across a bridge severely damaged by the conflict because it is the only open entry-exit point.

“More than 10,000 people cross daily”, he explained. “They suffer; they feel hopeless, neglected and abandoned” because commitments are not upheld, trust keeps eroding and the space for dialogue is disappearing.

Engaging with the OSCE Special Monitoring Mission, which he called “the eyes and ears of the international community on the ground”, along with the Project Coordinator in Ukraine, UN Development Programme (UNDP), International Committee of the Red Cross and the European External Action Service yielded improvement proposals, including to repair the Stanytsia Luhanska bridge and to demine.

Turning to suggestions on the creation of a UN mission in Ukraine, he pointed out: “This is not a new discussion”, saying he had nothing to add, “except to reaffirm that we stand ready to engage on any concrete proposals, or decisions coming out of this esteemed body”.

In addition to the Ukraine, there are “other dark spots of conflict” in the OSCE area, he continued, citing Transdniestria, Georgia and Nagorno-Karabakh.

“The OSCE has a lot to learn from closer UN engagement”, including operational readiness and capacities and capabilities at various conflict stages Mr. Lajčák stated.

“But”, he added quickly, “the OSCE has a lot to give too”, citing tailored regional knowledge and niche expertise.

In a climate of eroding global arms control, he flagged that the OSCE can be “a platform for confidence-building and increased transparency”.

“When mobilized effectively and pulled together, the results can be historic” concluded the OSCE chairperson.

♦ Receive daily updates directly in your inbox - Subscribe here to a topic.
♦ Download the UN News app for your iOS or Android devices.
security council|Ukraine 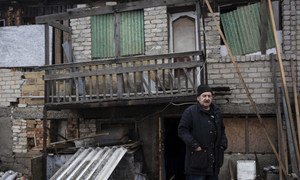 “Civilians continue to pay the highest price” arising from Ukraine’s on-going conflict with separatist rebels in the east, the UN Deputy Emergency Relief Coordinator told the Security Council on Tuesday, a conflict which is still claiming lives. 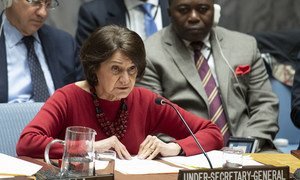