The First International Symposium on Youth Participation in Peace Processes concluded on Wednesday in Helsinki, Finland, with a global policy paper, according to reports, that aims to integrate their efforts, interventions and contributions towards sustaining the search for peaceful solutions to conflict.

In her keynote address, General Assembly President Maria Fernanda Espinosa highlighted Youth, Peace and Security as one of her seven priorities.

Today is a milestone, as we all prove to the 🌎 that youth from all margins of society + across regional boundaries, are actively working to build and sustain peace.🕊️ #Youth2030 #Youth4Peace pic.twitter.com/7K0Tuh7dhF

She called young people “agents of change” and outlined examples in which they have helped foster inter-communal dialogue, such as in Kenya, and consolidate peace, such as in Sierra Leone, Liberia and other countries.

Ms. Espinosa also addressed the importance of gender equality, decent work and the support for young migrants and refugees.

The General Assembly President concluded by underscoring that the world must improve youth participation in national and international decision-making and encouraged Member States to embrace young people in their delegations and to work closely with the Office of the Secretary-General's  Youth Envoy,  Jayathma Wickramanayake.

With over half of the world’s population under-30 and an estimated 600 million youth living in fragile and conflict-affected States, it is apparent that young people must engage in conflict prevention and mediation processes – a domain where they are often marginalized.

"Young people account for a considerable share of people living in the developing world and in conflict areas but they are often left outside of the scope of all decision-making in society, including peace processes”, said Timo Soini, Foreign Minister for Finland, one of the governments co-hosting the event.

For her part, the Youth Envoy called the Symposium “the global clarion call for a collective response in bringing voice and credibility to young people on the frontlines actively leading efforts to shape peace processes”.

Considering their sheer numbers and vital force, young people are key participants in development, democracy, peace-sustaining initiatives and peacebuilding interventions. As such, they must be empowered as decision makers to actively and meaningfully contribute to peace processes that affect their lives, according to the UN Envoy’s office.

“Young people are bridges”, said youth participant Leonardo Parraga. “They play a key role in connecting local actors like civil society organizations, with decision-making actors that have a seat inside the room”.

At the two-day Symposium ending on Wednesday, inter-generational participants exchanged views and best practices on involving young people in both formal and informal peace processes. Youth attendees, moderated, facilitated and acted as rapporteurs throughout all plenary discussions and working groups.

The event was co-hosted by the Governments of Finland, Qatar, and Colombia, and co-organized by the office of the UN’s Youth Envoy and Search For Common Ground in partnership with the UN Department of Political and Peacebuilding Affairs, UN Population Fund, UN Development Programme and the United Network of Young Peacebuilders. 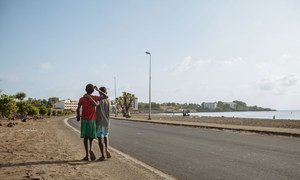