© UNICEF/UN0277723/Souleiman
On 26 January 2019, in the Syrian Arab Republic, children and families are huddled together, after being forced to flee their homes, before embarking on the long and arduous journey to safety at Al-Hol camp.

Nine in 10 of the arrivals at Al Hol camp in Al Hassakeh governorate were women and children, spokesperson Jens Laerke told journalists in Geneva.

“Many of them have arrived exhausted, hungry and sick,” he said “Approximately 45,000 people have fled the Hajin and Al-Baghouz area of Deir-ez-Zor and arrived in the camp, since December. Those who are fleeing have told us of a desperate situation for civilians in the area they are fleeing from. It’s affected by hostilities - civilians are being killed and injured on a daily basis - there’s large-scale destruction of civilian infrastructure and shortages of food, medicine and other basic necessities.”

Today we're publishing an overview of humanitarian needs in #syria in 2019. 46% of hospitals and primary health facilities are partially or not functional. The est. number of people in need of health assistance is 13.2m @UNinSyria pic.twitter.com/BkOkTVIKHX

Mr. Laerke also reported that 84 people, mainly children under-five, died either on their way to the settlement or shortly after arriving at the Al-Hol camp.

And according to aid teams there, 175 children have been hospitalized owing to complications from severe acute malnutrition.

The UN and partners are responding to growing needs at Al-Hol camp and surrounding areas by providing life-saving assistance to all new arrivals, along with food, water, shelter, and warm clothes and blankets.

Elsewhere in Syria, a desperate humanitarian situation prevails, despite a reduction in violence in many parts of the country over the past year.

“With the crisis in its eighth year, staggering levels of need persist for people throughout Syria,” according to OCHA’s Humanitarian Needs Overview 2019 for Syria.

Published ahead of a conference co-chaired by the European Union (EU) and the UN in Brussels from 12 to 14 March, the OCHA document states that 11.7 million people need help inside the country. including 6.2 million who are internally displaced. A further 5.6 million are refugees.

“The population continues to look for safety in parts of the country still affected by ongoing hostilities with significant protection needs, new and protracted displacement, increased self-organized returns and the sustained erosion of communities resilience,” it warns.

For millions of Syrians “the crisis is far from over”, it insists, with needs including food and livelihood assistance, health care, shelter, water, sanitation and hygiene support.

Education for children is also urgently required, with more than two million boys and girls out of school across the war-torn country.

In addition, it warns, more than 10 million people are estimated to live in areas contaminated by explosive hazards “of all kinds”. 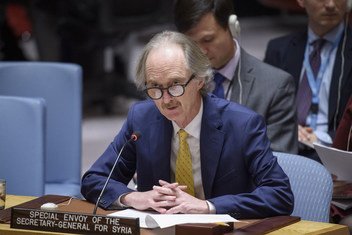 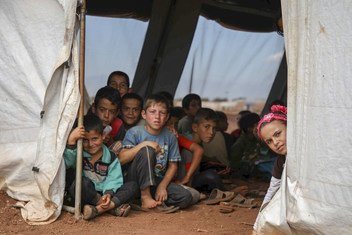